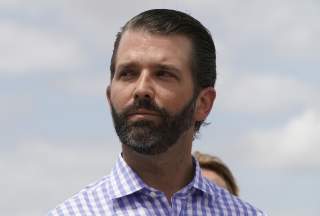 The Special Counsel might have ended, but the investigations continue. Last week the Senate Intelligence Committee issued a subpoena for Donald Trump Jr., the president’s eldest child, to appear before them. Don Jr., as he’s often referred to, has been running the Trump Organization alongside his brother Eric since his father ascended to the presidency.

More than his other siblings, Don Jr. has embraced the kind of populist messaging that elected his father in 2016. And the conservative base, at events such as the Conservative Political Action Conference (CPAC), has returned that support. After his well-received speech at the 2016 Republican National Convention, National Review writer Michael Brendan Dougherty observed, “Republicans nominated the wrong Donald Trump.” Following the separation and then divorce from his wife, Don Jr. began dating former FOX News commentator Kimberly Guilfoyle.

The media speculation that Don Jr. would follow his father’s footsteps into a political career, whether eventually running for governor of New York or the presidency itself, was dashed in the summer of 2017. It was revealed that during the previous summer’s campaign, Don Jr. organized a meeting at Trump Tower between himself, his brother-in-law (now senior advisor to the president) Jared Kushner, then-campaign manager (now federal inmate) Paul Manafort, and Russian lobbyists.

When publicist Rob Goldstone reached out to Don Jr. as an intermediary for his client Aras Agalarov, he wrote that the Russians were interested in giving the Trump campaign “some official documents and information that would incriminate Hillary and her dealings with Russia” as part of “Russia and its government’s support for Mr. Trump.” Don Jr. replied to Goldstone’s email by saying “if it’s what you say I love it.” Goldstone claims he purposely bolstered the email with fantastical claims to get the meeting for his client, which he considered to be his job. According to Michael Cohen, Donald Trump’s personal lawyer (now federal inmate), then-candidate Donald Trump was aware there was a meeting to garner opposition research on Hillary Clinton but was unaware of the Russia-connection.

When the trio of Trump affiliates met with Russian lawyer Natalia Veselnitskaya, they found the meeting to be pedestrian. While Veselnitskaya made sensational claims about Hillary Clinton’s involvement with Russian money-laundering, she told Don Jr. she couldn’t provide any evidence. She then began to lobby the campaign about the Magnitsky Act, a 2012 sanctions law against the Russian government. The law had been very deleterious to the Russian state, and the claims about Hillary Clinton appeared to be a cover to lobby the campaign about repealing it. While the Trump Tower meeting formed a key component in the Trump-Russia espionage conspiracy theory, the Special Counsel determined nothing illegal occurred. Many people however, both Republican and Democrat, were highly critical of Don Jr.’s actions, often calling them naïve, and disparaged him for being willing to accept information from a foreign government.

Unlike his compatriots, Don Jr. declined to be interviewed by the Special Counsel. He did, however, testify in front of the Senate Intelligence Committee in September 2017 about the Trump Tower meeting. In total, his time in front of multiple committees was over twenty-five hours. It was long understood that witnesses would be interviewed a second time after the release of the Mueller Report; Jared Kushner testified for a second time in March. However, there is speculation that Don Jr.’s answers in front of the committee do not correspond to the findings of the Mueller Report, for instance, how many people Don Jr. told about the Trump Tower meeting and how much he was involved in the Trump Tower Moscow project before the start of the campaign. The issuing of the subpoena was preceded by apparently weeks of negotiations attempting to get Don Jr. to appear voluntarily.

Unlike the Democratic-led investigations in the House, the subpoena was issued by Senate Intelligence Chair Richard Burr (R-NC). Burr, who is serving his third term in the Senate and has already announced he’ll be foregoing reelection in 2022, has received heated criticism from his Republican colleagues for his move. Fellow North Carolinian, Senator Thom Tillis, tweeted, “The Mueller Report cleared @DonaldJTrumpJr and he’s already spent 27 hours testifying before Congress. Dems have made it clear this is all about politics. It’s time to move on & start focusing on issues that matter to Americans.”

During a press conference, President Trump repeated that he did not expect this development. “For my son, after being exonerated, to now get a subpoena, to go again and speak again, after close to 20 hours of telling everybody that would listen about a nothing meeting? Yeah, I'm pretty surprised. I'm just really surprised,” said the president. When asked if he would fight the subpoena, President Trump did not give an affirmative answer.

If Don Jr. did decide to disobey the subpoena and not appear in front of Congress, it would create a serious political problem for the Senate leadership. The House Judiciary Committee just voted to find Attorney General William Barr in contempt for not providing documents, a vote that will now move on to the full House. If Don Jr. does the same, there would be immense public pressure for the Senate Intelligence Committee to find the president’s son in contempt as well. If successful, the vote would move to the full, Republican-majority Senate. This is after Senate Majority Leader Mitch McConnell (R-KY) said “case closed” on the investigations relating to the Russia matter.

Where will the conflict head next? Former State Department official Peter Van Buren believes the subpoena will feed the Democratic Party’s appetite for investigations. “After being told for two years to wait for Mueller, the Democrats now want a do-over. Unhappy with the results—no conspiracy with Russia and no charges for obstruction or anything else—the Democrats now want to disregard Mueller's conclusions in favor of an endless round of investigations, reinterviews and subpoenas,” said Van Buren, who followed the Trump-Russia espionage conspiracy from its origins.

Van Buren believes Burr’s continuous investigation post-Mueller is another example of a pre-determined conclusion. He told The National Interest it’s the “same for demanding a redo of Don Jr.'s testimony about the June meeting. Mueller said, ‘no charges’ over that, which the Democrats refuse to accept. They're desperate for more political theatre, maybe to try and twist words into something [MSNBC host Rachel] Maddow will call perjury, maybe hoping for a Colonel Jessup moment where Don Jr. confirms everything they so badly still want to believe is true, in the face of overwhelming evidence it isn't.”

Hunter DeRensis is a report at the National Interest.