Where Coronavirus Relief Spending Has Gone: A Breakdown 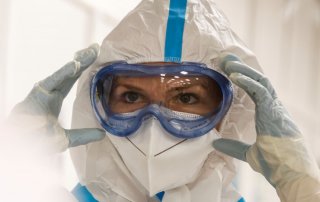 Congress has authorized nearly $4 trillion for a fiscal support spending blitz to combat the coronavirus pandemic and recover a swamped economy—but roughly 40 percent of the relief hasn’t been committed or disbursed yet, according to the Committee for a Responsible Federal Budget’s COVID Money Tracker.

Overall, about $2.43 trillion has been committed or disbursed to date, with the most amount of legislative spending pumped towards loan programs like the PPP—although roughly $129 billion hasn’t been disbursed yet—Economic Injury Disaster Loans, airline industry support, the Small Business Administration and U.S. Postal Service lending. The tax policy Covid-19 response was one of the lowest areas of spending.

“The most surprising thing to me is how few employers, we think, have taken the option to defer their payroll taxes” Marc Goldwein, the senior vice president and senior policy director for the committee, said in an interview.

Established under the CARES Act, the Congressional Budget Office and the Joint Committee on Taxation estimated that employers would defer roughly $352 billion in payroll taxes per year, with half of the amount due by 2021 year’s end and the other half by the end of 2022. But only $45 billion has been committed to date, according to estimates by the Money Tracker.

“Really big employers that are doing financially OK, but are taking advantage . . . of the interest-free loan, did this. But for the most part, employers didn’t do it,” Goldwein said. “A lot fewer employers took advantage of this than what was expected.”

Roughly 81 percent of unemployment insurance has been spent, and almost all funds set aside for stimulus checks and vaccine and treatment development have been tapped into the economy. State and local funding, however, has only committed $216 billion out of its allowed $277 billion, with most of it spent on the Coronavirus Relief Fund used to aid states, local governments and tribes to contain the rapid spread of the virus.

With most of the CARES Act spending dried up, top lawmakers from both sides of the aisle have called for another round of federal relief. But back-and-forth negotiations between Senate Majority Leader Mitch McConnell (R-Ky.) and House Speaker Nancy Pelosi (D-Calif.) have remained inconclusive, as the two are divided on several key issues regarding the legislative language of jobless benefits, state and local funding and vaccine distribution plans. As the two tangle on the package, Congress has presented no signs of recent progress, forcing more small businesses to permanently shutter, millions of Americans to file for unemployment and families to fall below the poverty line.

“The most urgent action Congress can take is to reallocate these funds to focus on the people who are struggling and require the relief now. In short, the longer people on the edge have to wait, the harsher the costs they must bear, and the longer-lasting the damage will be.” Wayne Winegarden, an economist and senior fellow in Business and Economics at the Pacific Research Institute, told the National Interest.

Goldwein specified that there is no extra money available, as the spending “just ended up costing less” and redirecting funds would still increase the overall deficit.

The money left over to potentially “reallocate” is primarily within funds designated for the Federal Reserve, Goldwein said, as the committee’s Money Tracker estimated that the Fed has only disbursed around 33 percent of its $7.21 trillion allowed. Both the GOP and Democratic House proposed relief packages that were unveiled in recent months suggest reallocating Fed funds, as well as some from the PPP.

The Fed has provided $2.38 trillion of support through asset purchases, loan programs and liquidity measures.