Why America Needs to See The Interview: A Primer on the Sins of North Korea 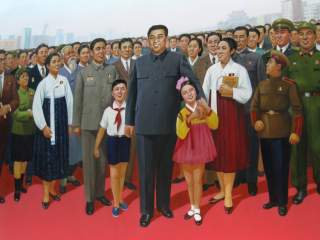 Much has been written about North Korea's hacking Sony over the release of The Interview. The movie itself has received mixed reviews. Like other Seth Rogen films, it is laced with four-letter words and their multisyllabic variations, as well as with crude references to sex, again, in all their variations. Yet the film is a must-see.

National-security specialists, notably those who focus on northeast Asia, probably can recite the sins of Pyongyang in their sleep. The average American, on the other hand, is probably not aware of the extent to which the hermit kingdom poses as much of a threat to its own people as it does to the free world. Most Americans have little sense of the extent to which Kim Jong-un and his cronies have continued his family's long-standing tradition of starving its own people. But viewers who see children dragooned into mindless recitations of Kim's greatness, who are shocked by the characters in the mini-orchestra that plays for the dictator and his cronies, and who are treated to scenes that contrast Kim's opulence with the poverty that marks daily life in North Korea, will absorb its message far more easily than they would from any Fox News or CNN telecast.

The essence of North Korea is symbolized by Kijong-Dong, the fake city that the North Koreans have built inside the Demilitarized Zone that separates the two Koreas. When viewing the "city" skyline from Panmunjom, one can see the lights of the entire town go out at exactly the same time every night. Most Americans do not have the opportunity to get to Panmunjom, however, and to see an example of what the real North Korea is all about.

Yet The Interview offers the average American a similar, though virtual, experience. After television interviewer Dave Skylark (played by James Franco), who had succumbed to Kim Jong-un's wiles, witnesses a tantrum by the young dictator and realizes that he has been played for a fool, he wanders past a supermarket stocked with fruit that Kim (wonderfully portrayed by Randall Park) had previously pointed out to him as typical of the fare available to the North Korean people. When Skylark discovers that the fruit in the Pyongyang supermarket is fake, no moviegoer can fail to comprehend the scene's message. Like Kijong-Dong, it demonstrates that there are no limits to the lengths to which North Korea will go to con its own people, not to mention those in the outside world who are gullible enough to buy into its propaganda.

Rogen and Franco inject enough slapstick into the film to make even a sourpuss smile. The scene in the North Korean production booth, in which Rogen and Kim's thugs engage in mutual finger swallowing, while Skylark is cutting Kim down to size as he interviews him, will get belly laughs out of most people. To be sure, the silliness does get tiresome after a while. Still, there is something to be said for a movie that demythologizes the deified leader of North Korea by demonstrating that, like all humans, he, too, defecates.

No one watching this movie will be surprised at North Korea's violent reaction to its release. Nothing deflates like humor, and, as the film demonstrates, there is plenty about North Korea to deflate. Sony finally decided to reverse its policy and release the film to theaters around the country. It should never have withheld it in the first place. The Interview may not be of Oscar caliber, but it surely deserves some award from the Screen Actors Guild for taking on the world's nastiest dictator and turning him into a complete fool.

At a time when it appears that the United States is increasingly looking inward, this film, however immature its humor may be, underscores why there remain threats to America's interests that must be countered. Comedy is one way to address these threats, and The Interview certainly does that. In the final analysis, however, what is needed in the face of those who would threaten America is a strong and credible military capability to contain them, confront them and ultimately defeat them.