Why Belarus Must Shed Itself of Alexander Lukashenko 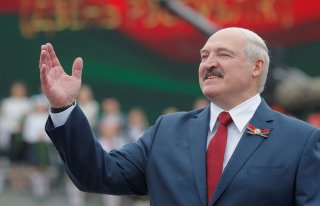 Alexander Lukashenko will seek his sixth term as president of Belarus on Sunday. The election is neither free nor fair, and the result will be rigged. But this is the country’s most unpredictable moment for over twenty years. Its outcome matters not only for Belarus but for European security and Western values.

Belarus is a paradox. It is a European state bordering three European Union and NATO members that has changed less than almost any other Soviet successor state. Across Eurasia, only Cambodia’s Hun Sen and Tajikistan’s Emomali Rakhmon have been in power longer than Lukashenko’s twenty-six years. Belarusian “democracy” has meant one person, one vote, once. Lukashenko’s first election victory in 1994 was competitive. But his regime grew rapidly authoritarian, statist and even murderous while the rest of Central Europe underwent democratic and market transition. His brand of welfare authoritarianism combined stability, full employment and high public investment to gain support with surveillance, persecution and suppression of opposition.

Russia kept Belarus’s unreformed economy afloat through energy subsidies and market access. Its president, Vladimir Putin, has sought to use this dependence as political leverage to subordinate Belarus. Lukashenko has largely averted this: no leader has consistently dealt with Putin more effectively. Putin knows it: his body language of their meetings radiates discomfort. Lukashenko has also periodically tilted at the European Union to show Russia that Belarus has other options.  The EU has sought to apply its own linkage, one based on values rather than geopolitics, by demanding the easing of domestic repression as the price of a closer relationship, with only limited and temporary successes.

This “multi-vector foreign policy”—a balance of antipathies as much as interests—has been central to sustaining Belarus’s anachronistic regime in twenty-first-century Europe. Lukashenko “fears Russia and hates the West,” as Andrei Sannikov, an opposition leader forced into exile, puts it. But for a long time, he took the carrots and dodged the sticks of both sides effectively. There have been times when the West simultaneously sanctioned Belarus while disbursing International Monetary Funds, even as Russia subsidized Belarus while blocking key exports.

The result has been a complex set of shifting domestic and external priorities, punctuated by presidential elections. In the months before the 2010 election, for example, Belarus needed Western help against the twin threats of Russian pressure and the global financial crash. It reined in repression, released all political prisoners and joined the EU’s Eastern Partnership. But when the center of Minsk filled with protesters on election night, Lukashenko ordered a brutal crackdown that lasted several months and froze relations with the West.

The next election in 2015 seemed to break old patterns in ways that benefited Lukashenko. A demoralized civil society needed little suppression. For the first time, EU sanctions were lifted, rather than renewed or tightened, after an election. Lukashenko also gained from the Ukraine-Russia conflict. Hosting the Minsk peace process, he sought to present himself as a key facilitator rather than the last dictator, in Europe.

But the social contract that kept Lukashenko in power for so long is now expiring. The forthcoming election is a moment of truth. Three factors are responsible. First, Belarus faces a deepening economic crisis as chronic problems and debts of the state-led economy mount up. Energy market turbulence compounds this. Belarus is a major exporter of oil but not a producer of it. The country buys and refines duty-free crude from Russia, and sells it profitably onto world markets. Russia has begun to unpick this arrangement and will end it fully by 2025. In the meantime, lower oil prices since 2014 have hit Belarus’s oil revenues. Prices for potash, another key export, are at a thirteen-year low. To stem losses, state-owned enterprises have shed labor. In 2015 Lukashenko penalized unemployment with a “tax on parasitism,” but was forced to retreat in the face of protests two years later. With domestic problems mounting and external conditions turning against it, the unreformed economy is running out of options.

The second factor driving change is generational change. Belarusians born under Lukashenko’s rule are not nostalgic about the Soviet past. The only leader they have known seems increasingly out-of-time and detached from reality, with nothing to say to their aspirations. As elsewhere across the former Soviet Union, the rise of a new generation is slowly, but inevitably, shifting the social and political landscape.

Third, Lukashenko’s disastrous mishandling of the coronavirus crisis severely dented his paternalistic appeal even among old supporters. After initially denying that “corona-psychosis” would harm the country, he advocated bizarre cures such as vodka and tractor-driving. Worse still, he showed contempt for victims by blaming them for their own death. In place of an absent state, civil society mobilized to deal with the pandemic by supporting medical staff and supplying equipment. This remarkable initiative helped build capacity, experience and confidence.

These forces are now driving an unprecedented challenge to Lukashenko. Three features of the election demonstrate this. First, several credible candidates entered the race despite great risks. Viktor Babariko was head of Belgazprombank, one of the country’s biggest banks, for twenty years. Valery Tsepkalo was part of Lukashenko’s first election team in 1994, and later deputy foreign minister and ambassador to Washington. He set up and ran the Minsk hi-tech park, a success story that exports software around the world.

With leadership experience, good connections and no past involvement in opposition politics, both candidates had much to lose—and have done so already. In June, Babariko and his son were arrested and Belgazprombank taken over by the state, angering Russia’s giant gas company Gazprom, which owns half the shares. In July, Tsepkalo was disqualified from the election and forced to flee Belarus with his children. Although neither candidate can now take part in the election, attempts to do so show how deeply disillusion has spread.

Second, this suppression has incited, not intimidated, Belarusian society. The central figure is Svetlana Tikhanovskaya, the wife of a third major contender, the popular video blogger Sergei Tikhanovsky, who was also arrested and prevented from running.  Seen as posing no threat, Svetlana was allowed to run in his stead—an extraordinary miscalculation by Lukashenko. With no political experience and just one promise—to release all political prisoners and hold fresh, free elections—her campaign has lit up Belarus. Her rallies attract record crowds across a country that is, in her words, “tired of patience, silence and fear.” Supported by the Babariko and Tsepkalo teams, this reluctant candidate has grown into an assured performer. Skillful, resourceful and creative, and united around broad themes of freedom and change, the united opposition has yet to make a mistake.

The third new factor is Lukashenko’s palpable worry. In June he appointed a new hard-line government of siloviki, warned against a Ukrainian-style Maidan and pointedly mentioned the 2005 massacre of several hundred civilians in Andijan, Uzbekistan. In the past week, army and special forces have conducted ostentatious exercises in Minsk. He is rattled.

What will happen next? Over the next few days, Lukashenko could steal the election through fraud, neuter it by removing Tikhanovskaya from the ballot, or cancel it altogether. Each will provoke further protests. Lukashenko’s instinct will be to crush them as before, this time with military as well as security forces if necessary. The key question will be what elite networks, especially in the force structures, do. Some senior figures are too deeply bound by complicity in Lukashenko’s worst crimes to desert him. But others may choose a higher loyalty. The opposition has reminded security forces that, under the Belarusian constitution, it is not a crime to disobey an illegal order.

A full-scale assault on the courageous opposition across the country—not only in Minsk—would be mammoth and violent, and invite severe Western sanctions against the regime. This would end Lukashenko’s long balancing act, leaving him more vulnerable than ever to a Russia already pressuring him to accept some form of vassal status. Russia’s obsession with geopolitical space—Belarus is 90 percent of the size of the British mainland—would embolden it to exploit this.

But Russia has other concerns too. A democratic transition in an Eastern Slavic neighbor would be deeply unwelcome to Putin. He has been in power for only six years less than Lukashenko, his popularity is falling, and he faces big demonstrations in the Far East. A free Belarus, like a free Ukraine, presents the threat of a good example. Preventing it is not a national, but a regime, interest.

But Russia would be ill-advised to intervene to influence the outcome of a confrontation between the Belarusian state and its people. Belarus is not a piece to be taken on a chessboard, but a society that wants to make its own choices. The opposition harbors no hostility towards Russia, and foreign policy plays no role in its demands. That could change if Russia is seen to try to thwart the popular will. Such a move would be self-defeating, as it has in Ukraine since 2014.

What should the United States and EU do now? Before the election, they should warn Lukashenko, privately but emphatically, that a crackdown will have severe consequences, as the United States did to Ukrainian president Leonid Kuchma during the 2004 Orange Revolution. The United States should make clear that its recent warming of diplomatic relations with Belarus will end. In particular, it should not send its first ambassador to Minsk since 2008 as currently planned.