Why Disenchanted Conservatives are Voting for Democrats 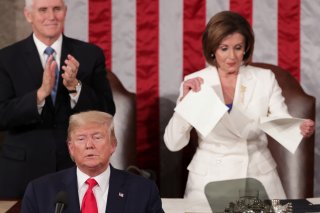 The decision by House Speaker Nancy Pelosi to send the impeachment article passed by the House to the Senate has been celebrated by many Democrats as a demonstration of the need to do the right thing, as they underline the constitutional basis for impeaching and convicting Donald Trump.

Impeachment, however, is both a political process as well as a judicial one. That explains why some Democrats have been concerned that the proceedings involving a trial in the Senate might drag for several weeks or months, consuming the time of a New Democratic-led Congress and that of President Joe Biden, who replaced Trump earlier this week.

To put it in simple terms applicable to America’s 24/7 media environment, imagine that clichéd split television screen. On one side is Biden mobilizing public support to deal with the formidable and interlocking challenges of responding to the coronavirus pandemic and dealing with a broken economy as he tries to win congressional backing for his legislation and to get the Senate’s approval for his nominations for top positions in his administration. On the other side of the screen, there are old and new images of Trump as Democratic and Republican Senators debate the case for and against convicting him. The images show crowds of his supporters filling Washington, DC and state capitals, insisting that the forty-fifth president is innocent and that those who committed high crimes and misdemeanors are his decorators.

Notwithstanding hints telegraphed by Senate Minority Leader Mitch McConnell that he would support the impeachment of the president and the ten Republican House members who voted in favor of the article of impeachment, it’s far from certain that Democrats would succeed in convincing seventeen senators to convict Trump, turning the process like in the last time the Democrats tried to remove the Republican president from office into a form of legislative onanism. It would achieve nothing except making the impeachers feel good. And anyway how do you remove an ex-president from office?

If anything, a failure by a Democratic-controlled Senate to convict Trump would be celebrated by his groupies as another major personal and political win over his adversaries, energizing them and making it more likely that Trump would be able to turn Mar-a-Lago into his Colombey, from where he would launch his political comeback in 2024.

And then there is poor seventy-eight-year-old Biden trying to reach compromises and make deals with his old Republican buddies in the Senate, including McConnell. He’ll do it so that he can get big legislative bills involving trillions of fiscal aid, rebuild the country’s infrastructure, and tackle climate change in a Senate where Republicans would continue to exert enormous power and who may consider the impeachment proceedings as obstacles on the way of cooperating with the White House.

So why is Pelosi pressing ahead with a Senate trial? She had initially resisted pressure from her Democratic colleagues to impeach Trump in 2019, warning them that he wouldn’t be convicted in the Senate. It’s notable that Sala Burton, a lawmaker who died from colon cancer in 1987, endorsed Pelosi to succeed her as a representative of her California district, hailing the political instincts of the local politician, who was only forty-seven-years-old at the time.

To be certain, the daughter of the former Italian-American Mayor of Baltimore knows exactly what she is doing, which has less to do with liberal idealism and more with the Realpolitik of Niccolo Machiavelli. Look at the recent Senate race in Atlanta. A person should ask how it was possible that one of the nation’s ultra-red states elected as its Senators a leftist African-American pastor who makes President Barack Obama look and sound like a right-leaning Democrat and a young documentary film-maker who embodies the spirit of “wokism.”

There is no need to spend a lot of time analyzing the post-election polls to figure out why the Republicans lost the Peach State, and as a result, their control of the U.S. Senate. The writing was on the wall since the midterm 2016 midterm election: Thanks to Trump, the Republicans have lost white suburban voters, which used to be an electoral backbone of the GOP long before the “forgotten American men and women” from the deindustrialized parts of the country started migrating to the Republican Party.

The growing antagonism of college-educated and professional Republicans towards Trump has only intensified over the last two years of his administration, and especially in the wake of his failed response to a pandemic that has killed so many Americans and devastated the country’s economy.

During the earlier three years when the economy was prospering, Republicans were still hopeful that members who were put-off by Trump’s outbursts and controversial statements on Twitter would still vote for the incumbent Republican president.

Hence, Pelosi wants to make sure that conservative voters who turned their backs on the Trumpist Republican Party are not going to have second thoughts. For example, there’s the distinct possibility that some of them will be repelled by the thought that Alexandria Ocasio-Cortez and the other Democrats who share her extreme leftist views will have an impact on the Biden administration. Those voters will be repulsed by the way that politically correct culture and identity politics is taking hold over the Democratic Party.

Pelosi hopes that the upcoming Senate impeachment trial, which will showcase Trump’s controversial behavior and conduct in office will be examined and re-examined by conservative voters 24/7. Perhaps they will not like everything the Democrats say and do though. Perhaps they will return to their old political home, especially if Biden moves in a centrist direction and their fellow Republicans continue to cling to the ghost of Trump.