Why Does Chile Care About Israel and Palestine? 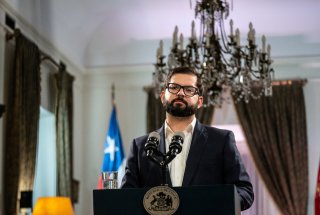 Chile made headlines for a surprising reason last week. The country’s left-wing president Gabriel Boric refused to accept the new Israeli ambassador’s credentials, citing news that Israeli forces had killed a Palestinian in the West Bank. An incident that had barely registered outside of Palestine was now a rallying cry for the Chilean government.

In a speech to the UN General Assembly yesterday, Boric denounced the “permanent human rights violations against the Palestinian people” and called for a “free and sovereign state of their own.”

Boric’s choice to stand with Ramallah and Bukele’s coziness with Tel Aviv make sense in the context of Latin American history. Support for Israel has long been a way for right-wing Latin American governments to show solidarity with the United States, while the Palestinian cause has been a rallying cry for left-wing opponents of U.S. power.

Meanwhile, many Palestinian immigrants have assimilated into the region’s pro-U.S. business elite, setting up a choice between embracing their heritage or standing up for their present-day political interests. Chile’s Arab diaspora tends to prioritize the former, while Bukele has clearly embraced the latter.

Since the Cold War, Israel has been seen as a lonely pro-Western outpost in the Middle East. And even some Western states have condemned Israeli military actions in occupied Arab territories. The United States has relished playing the role of Israel’s most adamant supporter in diplomatic forums, taking up contentious Israeli positions that no other country will back.

Small countries like Guatemala have embraced some of these positions—such as the status of Jerusalem—as a low-cost way to signal that they value Washington’s approval.

It used to be a similar story with Taiwan. For decades, the United States refused to recognize the People’s Republic of China, insisting that the anti-Communist government in Taiwan was the true Chinese state. Whether a country kept its ambassador in Taipei or Beijing was once a reliable sign of their side in the Cold War. Although the United States has since opened relations with mainland China, a few small countries in the Caribbean and the Pacific islands still show their anti-Communist bona fides by recognizing Taiwan alone.

These diplomatic stances can bring direct material benefits. Israeli and Taiwanese backing helped anti-Communist governments win civil wars and crush rebellions across Latin America during the 1980s. Today, cutting-edging Israeli military tech—especially tools for hunting down internal threats—is coveted by military leaders around the world. The Honduran government bought so much military equipment from Israel in recent years that it sparked a rumor that Israeli troops were going to be stationed in Honduras.

Israel has also taken on a religious significance, as millions of Latin Americans have joined Evangelical churches, some of which preach that the state of Israel is a fulfillment of Christian prophecy. Those believers now make up a significant right-wing voting bloc across the continent.

Naturally, left-wing parties opposed to U.S. influence have distinguished themselves with a pro-Palestine stance. Cuba’s Communist government has offered scholarships to Palestinian refugees, and historically backed Arab military action against Israel. During the Pink Tide of the early 2000s, when socialist governments were elected across the region, several of them cut ties with Israel and recognized Palestine.

All of this symbolism is complicated by Palestinian and other Arab immigrants, many of whom laid down roots in Latin America as early as the nineteenth century. Like immigrants in all parts of the world, the estimated half-million Palestinians of Latin America have ended up in different walks of life, with different political worldviews as a result.

The Palestinian diaspora has had the most meteoric success in Central America, where many Christian merchant families from Bethlehem settled in the late Ottoman period. Although they faced discrimination at first, Arabic names are now a symbol of wealth and prestige in the region. Palestinians also entered local politics, both as revolutionaries and defenders of the status quo.

In fact, El Salvador’s 2004 election was a contest between two Palestinian candidates. The left-wing choice was Schafik Handal, who led the FMLN rebel group during the Salvadoran civil war in the 1980s. He lost to Antonio Saca, a right-wing businessman. Both had roots in Bethlehem.

Bukele straddles the two sides of Palestinian-Salvadoran politics. He came up through the ranks of Handal’s FMLN but broke from the party in 2017, publicly accusing it of corruption and anti-Palestinian racism. Since then, Bukele has embraced a suite of right-wing policies, including pro-business initiatives, heavy police crackdowns, and the use of cryptocurrency.

“‘Palestinian bourgeoisie,’ ‘Turks,’ ‘termites like the Jews.’ This is the extreme xenophobia of those who defend the current FMLN leadership. And then they complain about Trump. What would Schafik Handal or [his brother] Farid Handal say if they heard that the party they founded called them descendents of ‘termites’?” Bukele tweeted in 2018.

After winning the presidency in 2019, Bukele played up his pro-Israel bona fides. He went on a government-sponsored tour of Israel, where he prayed at the Wailing Wall, and talked about his wife’s Jewish roots. In an interview with an Arabic news outlet, Bukele said that Palestinians should seek to be “peaceful and open for business” within a state “smaller than the one” promised in the Oslo peace accords.

Hundreds of miles to the south, Chile hosts the world’s largest overseas Palestinian diaspora. Like their Central American compatriots, Chilean-Palestinians tend to be Christian, wealthy, and conservative. Many come from the same areas near Bethlehem.

However, the Arab diaspora in Chile has stayed fiercely nationalistic. There are large and vocal Arab community organizations, including a soccer team called Palestino, whose fans chant slogans about Gaza and sport Palestinian colors.

And right-wing Palestinian-Chileans do not face the same pressure to embrace pro-Israel politics as their Central American compatriots. On the contrary, Palestine has become a cause for Chilean politicians on both sides of the aisle, from avowed socialists to former collaborators with the right-wing military dictator Augusto Pinochet.

Daniel Jadue, a Palestinian Communist, was briefly the favorite to win the Chilean presidency in 2021. Although the Jadue (Hadwa) family had immigrated in the 1920s, it continued to speak Arabic at home and stayed in touch with cousins suffering under Israeli occupation. Jadue’s father was a Pinochet supporter, but Jadue found himself attracted to left-wing Palestinian factions, which is how he became involved in politics.

Jadue ultimately lost his party primary to Boric, an academic with a Croatian background. Boric has been no less staunch in his support for the Palestinian cause, referring to Israel as a “murderous” and “genocidal” state and backing a boycott of Israeli products.

In the general election, Boric faced José Antonio Kast, whose brother held a high-level post in Pinochet’s regime. Boric won, and in his first interview as president, he named Palestine as a foreign policy priority for Chile.

All three candidates had faced anti-Semitism scandals. Boric and Jadue were both accused of promoting anti-Semitic rhetoric, while Kast’s German-born father was a member of the Nazi Party during World War II.

Nevertheless, Kast embraced Israel, visiting twice and serving on Chilean-Israeli joint parliamentary committees. It’s perhaps a sign that Chile is moving closer to the rest of the continent, with the right wing showing more apparent affinities for Israel and Palestine becoming more of a clearly left-wing cause.

After the spat with the Israeli ambassador last week, Kast took Israel’s side. He pointed out that the Palestinian youth killed by Israeli forces was not a civilian but an armed rebel.

“This is the terrorist guerrilla who died in a clash and motivated President Boric to insult the State of Israel,” Kast tweeted. “Chile's foreign relations are at serious risk thanks to the President's tantrums!”

Matthew Petti is a 2022-2023 Fulbright fellow. He was previously a reporter for Responsible Statecraft and research assistant for the Quincy Institute. The views expressed here do not represent the views of the Fulbright Program, the U.S. Department of State, or any of its partner organizations.