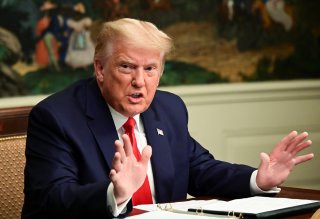 Donald Trump’s foreign policy legacy is deeper than the surface-level controversies might suggest. Certainly, his tenure saw wild swings in policy, and repeated, embarrassing attempts to conduct foreign policy by tweet. He failed to do many of the things he promised: he didn’t pull out of Iraq, Syria, or Afghanistan; his trade war with China largely backfired; he didn’t improve relations with Russia; and his maximum pressure campaign on Iran brought it closer to a nuclear weapon. But Trump’s presidency also has two bigger long-term implications. First, he empowered a breed of hawkish, Jacksonian nationalism within the GOP that will likely endure long after he himself is gone. From conservative think tanks to the Trump National Security Strategy, the GOP has almost-uniformly shifted away from the nation-building and freedom agenda of neoconservatives towards an America First view of the world. Shorn of Trump’s own personal eccentricities, that view will be far more coherent, if not necessarily more palatable. Second, Trump’s term in office also served to undermine a variety of foreign policy orthodoxies. From globalization and trade to allied burden-sharing and the war on terror, Trump forced America’s foreign policy elites to re-examine their assumptions about the world, and to confront the ways that it has changed since 1991. In a crude way, Trump identified many of the problems with America’s post-Cold War foreign policy consensus, though he himself proved unable to resolve most of them.

Unfortunately, Biden is promising the opposite. His campaign slogan was “Build Back Better,” and the candidate and his surrogates repeatedly emphasized their desire to return to a “more normal” foreign policy, one characterized by multilateralism and American “leadership” in the world. Though the vague phrasing may be common to all presidential campaigns, the sentiment is clear: Biden hopes to “restore” American foreign policy to the way it was before Trump, reassuring allies and reasserting America’s dominant role on the world stage. Many of his top advisors are almost certain to seek a return to the bipartisan liberal internationalist status quo that has characterized U.S. foreign policy since 1991. This would be a mistake.

Certainly, a return to normal would be welcome in some areas. Joe Biden is unlikely to tweet threats at other world leaders, and his administration’s policies are likely to be more coherent and better communicated. Even a return to the status quo would be better than the Trump administration in a variety of areas, from global pandemic cooperation to Iran policy. But simply returning to the status quo in U.S. foreign policy is also a waste of the opportunities offered by the end of the Trump era. Trump smashed through some of the norms that bound prior presidents; negotiating with North Korea without preconditions, for example. And he worsened or brought to light many of the existing problems with America’s foreign policy. His aggressive use of sanctions dramatically increased awareness of the long-running problem of sanctions overuse, for example. His choice to lay waste to the State Department sparked a discussion about the unbalanced nature of U.S. foreign policy funding in recent years, and the way it emphasizes military spending over funding for diplomacy, aid, or other tools of foreign policy.

If Biden takes us backwards—to the pre-Trump era—rather than forwards to a new consensus, he will squander the opportunity to fix these problems. Take allied burden-sharing, for example. It has been a problem for decades, but it took Trump’s brash public denunciations to finally make it a public issue. If Biden simply returns to the status quo of politely asked for increases in spending, it is unlikely to improve. Instead, he should maintain pressure on allies to contribute more to our common defense. Or consider the war in Afghanistan. Trump has been clear that he wants to end the conflict, going so far as to start negotiations with the Taliban. Though it has been a bit of a shambles, it would be a mistake for the Biden administration to abandon the peace talks or to delay that drawdown. Negotiations with North Korea? Biden has suggested that he would refuse to meet with Kim Jong-un, and suggested a harder line on North Korea. Yet continuing the Trump approach of talking to North Korea—particularly with a more competent foreign policy staff—offers the possibility of finding a workable deal to block further nuclear and missile development.

Let’s be clear: Donald Trump was not a good president. But he has created a window of opportunity for reform in U.S. foreign policy. Biden would be wise to seize that opportunity, taking us forward into a new era of foreign policy, rather than backwards to the pre-Trump era. If he grasps it, Biden may well be able to place American foreign policy on a steadier and more sustainable footing as we head into the 2020s.

Emma Ashford is a Resident Senior Fellow with the New American Engagement Initiative in the Scowcroft Center for Strategy and Security.