Why a Korean Peace Treaty Is Necessary 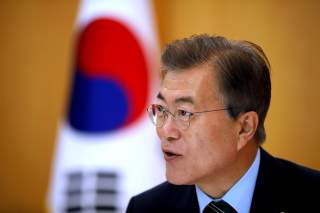 Negotiations with North Korea appear to be gathering momentum again after a cynical summertime lull. Amid rumors that a declaration to end the Korean War may be issued before the end of the month, it is vital to consider the wisdom of such an agreement in light of the best objections to it.

The Korean Détente of 2018 has already taught us a great deal. Détente skeptics like Robert Kelly were correct—North Korea is unlikely to give up its nuclear weapons anytime soon. Peaceful, comprehensive, verifiable and irreversible denuclearization (CVID) is a generational project, at best. More important than facing up to the obvious difficulty of the task, however, is recognizing that America has gained valuable information about the intentions of its negotiating partners. Washington has learned that the South Korean president is too deeply invested in rapprochement. Moon Jae-in’s precipitous approach is unrealistic, especially as his approval rating slides. Learning about Kim Jong-un’s intentions was perhaps the best tactical reason to pursue talks in the first place. In that regard, this episode has not disappointed. North Korea has put a moratorium on nuclear and missile tests and dismantled some testing sites. It has also returned the remains of American soldiers killed in the Korean War. Kim Jong-un has maintained cordial communications with the White House and refrained from aggressive actions even when negotiations stalled. Overall, this behavior constitutes evidence of sincerity and persistence.

This should inform U.S. expectations in three ways. First, complete, verifiable and irreversible denuclearization (CVID) is not a proper short or medium-term goal. Second, the United States has a role to play in managing expectations in South Korea. Third, North Korea may be willing to do significant deals that fall short of CVID. The survival of this détente requires a confidence-building program with bipartisan buy-in from both South Korea and the United States. The ultimate goal should remain denuclearization—and perhaps a formal association agreement between the Koreas—but not every step needs to involve nuclear dismantlement. A declaration to end the Korean War is a step that falls short of CVID, but which could generate the goodwill necessary to sustain the diplomatic process.

Kim Jong-un is reportedly frustrated by America’s reluctance to join such a declaration. America wants further steps towards denuclearization, yet it is unlikely to get irreversible or sincere progress without at least a peace declaration. The continuing state of war constrains all parties, but none more so than North Korea. Their paranoia and dishonesty is a function not only of their totalitarian institutions but also of their wafer-thin margin of security. North Korea is a geopolitical shrimp surrounded by extremely powerful neighbors. It is formally at war with two of them. It transparently distrusts China, its ostensible ally. The North Korean leadership knows that a wrong move could bring the rapid collapse of their rule. To put it mildly, this environment is not permissive of risk-taking. Though a peace treaty would not eliminate their paranoia, it may give them some extra breathing room to consider steps that were previously out of the question. Decades of sanctions and brinksmanship have not worked, but peace has never been tried. The Trump administration should give it a shot. It should not be held hostage to CVID.

Détente skeptics—prominently including Robert Kelly—have raised several objections to a peace declaration or peace treaty. The strongest is that it would be another unilateral concession to a regime with a long track record of duplicity. According to this story, the inter-Korean summits and the Trump-Kim summit in Singapore were massive gifts to Kim Jong-un. As noted above, this view ignores that the summits afforded valuable opportunities to learn about North Korea’s intentions. It also ignores that benefits of reduced tensions also accrue to America and South Korea. North Korea is dishonest. They have often pocketed concessions and ran. But America should still pursue peace talks because it serves U.S. interests. Peace would undermine the narrative of foreign encirclement pumped out by North Korea’s propaganda machine. It might inhibit their saber rattling—even if the current rapprochement fails. In the long run, it may lead to CVID. There is only one way to find out.

The United States has a unique role to play in brokering peace because it has greater strategic flexibility than North Korea. America can afford to take things on faith, but the North cannot. If America mistakenly trusts the North at this stage, the potential costs to the United States are small. The White House would suffer an embarrassment no greater than any of its others, and it could easily revert to military containment. South Korea would likely fall in line in the face of clear North Korean treachery. On the other hand, if North Korea mistakenly trusts America it could easily mean the end of their regime. The North’s thin margin of security and America’s record of regime change in Iraq, Libya and elsewhere mean their trust will be extremely difficult to earn. But Washington alone has the strategic flexibility to try to win it—and it should.

A second objection is that formal peace would necessarily involve recognizing North Korea as a sovereign state and therefore confer upon it an inappropriate level of legitimacy. The flaw in this argument is that recognition is the cost of doing business. The North Koreans will not consent to peaceful CVID unless they trust America. Washington will never earn their trust unless the United States recognizes their right to exist. This objection makes a deal impossible. Any argument for CVID, but against recognition, is internally inconsistent. Also, America has negotiated with North Korea many times before. That constitutes de facto recognition. It should not be a major step to go all the way, and the current South Korean government will not oppose it.

Concern for the status of U.S. forward deployments in South Korea constitutes a final objection. The ostensible purpose of keeping nearly thirty thousand servicemen and women there is to deter the North from resuming military operations against the South. American national security officials and South Korean conservatives are reportedly worried that a peace treaty would undermine the strategic rationale for keeping them there. But they have little to worry about in the short run. Kim Jong-un has reportedly made assurances that he will not ask for troop withdrawals as a precondition for a peace declaration. Additionally, there will be a strong rationale for forward deployments as long as the North retains nuclear weapons.

Still, this worry over troop withdrawals is an important long-run factor because it hints at possible ulterior American motives. If America ultimately views its forward deployments as a regional check on Chinese power or South Korea’s nuclear ambitions, then it will not be willing to consider withdrawals as part of a final denuclearization deal. Since the United States is highly unlikely to achieve such a deal without troop withdrawals, this process will force Washington to clarify its long-run goals. Put simply, America cannot have both CVID and its current degree of regional hegemony. Those who view U.S. forward deployments as a means to ends other than CVID, or as an end in themselves, need to face up to that fact. They should also consider that American intransigence on North Korea will likely weaken America’s relationship with the South in the long run. Even if this détente fails, South Korea’s partisan politics mean that “Sunshine” will eventually return.

Joining a peace declaration and initiating treaty negotiations are the only viable next steps as long as America’s ultimate policy goal is peaceful CVID. The apparent reluctance of the White House to take those steps is evidence that it needed a lull in negotiations to set priorities. America should be under no illusions that a peace declaration or treaty will lead to the rapid denuclearization of the North, but America should nonetheless take these steps because peaceful denuclearization is such a big ask. Washington must make asymmetric concessions now because the negotiating stakes are inherently asymmetric. North Korea is negotiating over existential issues. America is not. The division of Korea is one of the last unresolved tragedies of the twentieth century. Americans owe it to themselves, to their allies and to the Korean people to test the limits of North Korean sincerity. Peace talks will be a key test. If America really wants to find out how far North Korea will go towards disarmament, Washington should not hesitate.

Evan Sankey is a research analyst at the Johns Hopkins University Paul H. Nitze School of Advanced International Studies. He received his MA from SAIS in 2016.