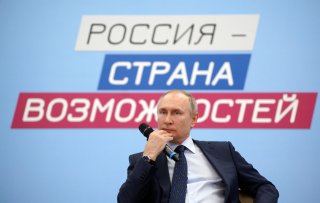 By agreeing that Russian president Vladimir Putin is a “killer,” President Joe Biden has unnecessarily complicated chances of cooperating with Russia on vital issues of U.S. national interests and global security. This includes nuclear arms control, climate change, cyber warfare, and Iran, for starters. Biden may have deep disregard for Putin, which stretches back to the last days of the Obama administration, and his tough talk may play well with American domestic audiences after four years of former President Donald Trump’s unseemly Putin flirtation. But never has a U.S. president gone so far as to personally denigrate any Russian or Soviet leader. Such an event is unproductive and emblematic of a deeper lack of strategic regard for the extremely high stakes inherent in America’s confrontation with Russia. By fanning the flames of this confrontation and by continuing to treat Russia as a pawn in U.S. domestic politics, Americans ignore Russia’s profoundly important role in international security. Such a direct insult of Russia’s head of state, even if followed up by proactive U.S. outreach for pragmatic engagement, could hinder progress on the many aspects of Biden’s foreign policy agenda that require Russian cooperation.

I say this as an advocate of human rights, democracy, and global peace. Biden’s gratuitous outspokenness will not promote these values and is neither in America’s interests nor those of global security. Whether or not Putin directly ordered any of the political murders (accomplished or attempted) over the past decades is something no one knows with certainty. Still, the Kremlin’s lack of serious investigation into any of these crimes certainly condones them—which is an indictment in itself. Sticking to established facts that are impossible even for Putin to deny would have put the Russian president on the backfoot and narrowed the scope for Kremlin umbrage. Moscow’s angry reaction to this event, no matter how calibrated it may be, will add to the accumulation of U.S.-Russian divisions and clashes over three decades—clashes that matter for four reasons to be considered together.

First, these clashes matter because Russia matters. Though this assertion is hardly new, American leaders continue to ignore it. Biden’s “killer” words are rooted in a long-standing American assumption that the Russian factor in global politics does not make much difference due to Russia’s relative economic weakness, structural decline, and endemic corruption. Back in 2014, former President Barack Obama derided Russia as a mere “regional power,” and President George W. Bush frequently neglected Russia or dismissed its vital interests when bigger issues for the United States or competing domestic political interests loomed larger.

And yet, Russia continues to affect international security in far more ways than its economic weight would suggest. Its geographic enormity touches on every region of strategic significance for the United States; its rank as the world’s second nuclear power and its cyber-tech and conventional military prowess directly affect Euro-Atlantic security.  They also render Russia crucial to any serious U.S. efforts to mitigate nuclear-weapons proliferation and gain control over the frightening threat of cyber warfare. Next, Russia’s rank as the world’s second oil and gas producer makes Moscow fundamental to any serious Biden administration efforts to build international momentum to reverse climate change; and not least, Russia’s willful pivoting towards China—despite the concomitant risks of doing so—increasingly shifts international politics backward to a renewed bipolar cold war that pits the United States and its allies against a China-Russia-led coalition (with others struggling in between). All of these factors elevate Russia’s importance in matters of international security. They demonstrate the unproductiveness of continuing to treat Russia as an adjunct of U.S. domestic politics and refusing seriously to engage in strategic dialogue, whatever the nature of Russia’s domestic regime.

Second, seen in historical context from a broader Russian perspective, Biden’s unprecedented rebuke fits into a longer pattern of perceived slights that form part of the bedrock underlying the current Russia-West confrontation. For Russia, such perceptions extend from a profound sense of exclusion from post–Cold War Euro-Atlantic security architecture to the dismissal of its voice over matters directly affecting its own interests.  Whatever legitimate and understandable reasons for the kinds of Western (U.S. and European) decisions that gave rise to such Russian grievances, the fact remains that Russian presidents from Boris Yeltsin to Putin have perceived Russian security interests to be systemically ignored and its status belittled. And status for Russia is not simply an identity complex; rather, it is deeply connected to Russia’s historical approach to national security, both at home and abroad. Indeed, achieving rough parity in the eyes of adversaries is at the root of Russian security strategies. All this means that Biden’s belittlement of Russia’s head of state will feel even more important for Kremlin elites than appearances might suggest. Such statements further strengthen hard-line arguments within top policy circles—and, perhaps more worryingly, weaken those of the more pragmatic-minded technocrats.

As a result, these latent dynamics will likely render Russia even less inclined to support U.S. and EU endeavors to manage global threats—the third reason. Though Putin certainly deserves international opprobrium and disdain, Joe Biden’s “killer” comment is counterproductive. The Kremlin, which doggedly and increasingly upholds China as its alternative partner to the West, will be even less inclined to cooperate, let alone compromise, with the West, even where it is in its rational interests to do so. This must certainly be the opposite of what Biden intended. Moreover, singling out the Russian president for direct responsibility for killing his opponents, while refusing to sanction Saudi Arabia’s Mohammed bin Salman, who has, in fact, been shown to have directly ordered the assassination of Khashoggi, smacks of hypocrisy with an anti-Russian flavor—a long-standing Russian complaint that risks further galvanizing Russian public opinion in support of Putin. How could this be considered effective U.S. foreign policy?

Fourth, although Biden’s comment parallels legitimate U.S. concerns about Russia’s deteriorating human rights record and its worsening authoritarian repression, historical evidence shows that the most effective way to steer authoritarian regimes towards better human rights behavior and political freedom is not through public rebuke or coercive containment. Rather, engagement and reduced levels of confrontation, in combination with deterrence, has proved to be a more effective recipe. As Jack Matlock, the penultimate U.S. ambassador to the USSR, wrote in a personal exchange with this author, “If we can change the environment from one of across-the-board hostility, the human rights side of things is likely to improve along with a stable strategic relationship. As of now, Putin has little to gain by what, in his mind, is the political cost of holding those guilty responsible. If relations were better, that would not be the case.”

Diplomatic history bears out Matlock’s words. The NATO’s 1967 Harmel Report replaced deterrence alone with dual prescriptions of deterrence and détente, containment and engagement, sticks and carrots. Incentives turned Soviet attention to human rights; over time, engagement opened doors to the Cold War’s peaceful end. In contrast, the Biden administration continues in practice to prescribe coercion and containment alone, notwithstanding rhetorical calls for engagement as well. It’s hard to see how this narrow approach will be effective, based on the last seven years (not to mention all of Russian history). Western coercive sanctions and containment alone have never produced more constructive Russian behavior abroad or at home.

Taken together, these four issues suggest that the Biden administration’s actions towards Putin’s Russia—encapsulated in Biden’s “killer” comment—are rooted in flawed assumptions about what constitutes effective policy towards Moscow. Those assumptions must be rethought, and our strategies revised to avoid the President’s interview becoming a killer moment for key issues in the administration’s broader foreign policy agenda that require Russia’s consistent cooperation.

Dr. Julie Newton directs the University Consortium, a Carnegie Corporation of New York-funded program for dialogue among leading Russian, European, and American universities; she is a Research Fellow at the Russian and Eurasian Studies Centre at St Antony’s College, University of Oxford, and an Associate Professor at the American University of Paris.