Why McGahn Was a No-Show 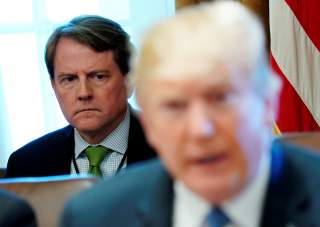 While the Trump administration debates the prospect of war with Iran, domestic turbulence is increasing. Wrapped in the transparent cellophane of politics, the three branches of government are entering a tug-of-war over their bedrock separation of powers.

This morning, former White House Counsel Don McGahn declined to appear in front of the House Judiciary Committee, despite a subpoena requiring his presence. McGahn, and his refusal to follow instructions given to him by President Donald Trump, is the keystone argument for finding that the president committed obstruction of justice. But one presidential direction McGahn did follow was not to testify before the House.

“When this committee issues a subpoena, even to a senior presidential advisor, the witness must show up. Our subpoenas are not optional,” said Chairman Jerrold Nadler (D-NY) at a truncated committee meeting today. To prove a point, Nadler recalled a previous example of this same situation. In 2008, President George W. Bush attempted to keep his advisors Josh Bolten and Harriet Myers from complying with a congressional subpoena. When the challenge went to court, Bush-appointed Judge John D. Bates ruled against the administration. Nadler quoted Bates’ 2008 ruling; “The executive cannot identity a single judicial opinion that recognizes absolute immunity for senior presidential advisors in this or any other context. That simple yet critical fact bears repeating. The asserted absolute immunity claim here is entirely unsupported by the case law.”

“Let me be clear: this committee will hear Mr. McGahn’s testimony, even if we have to go to court to secure it,” promised the Chairman.

The continued intransigence of the administration has pushed multiple Democrats to consider walking down the path of impeachment. John Yarmuth (D-KY), chairman of the Budget Committee, Mark Pocan (D-WI), chairman of the House Progressive Caucus, and multiple members of the Judiciary Committee have all endorsed opening an impeachment inquiry. Chairman Nadler is leaning in that direction as well, although he’s made clear that he views the inquiry as a tool to make the administration comply with subpoenas, not something he expects to lead for a full impeachment. Rep. Justin Amash (R-MI) recently became the first Republican in Congress to endorse the impeachment of Donald Trump, and he has not ruled out running for the 2020 Libertarian Party nomination. Speaker of the House Nancy Pelosi (D-CA) is still trying to keep Democratic energies geared towards policy instead of impeachment heading into the 2020 elections.

Beyond the scope of the Trump presidency, this battle of wills is playing out in conjunction with the three branches of government. The legislative branch is attempting to use its oversight powers to question personnel under the executive branch, and the latter is invoking privilege to protect what it views as its independent prerogative; both sides are now looking for the judicial branch to settle the dispute and find in favor of one of them. This are deep-issue, constitutional decisions that the government (and especially the courts) try to avoid making. Deciding in favor of one branch could alter the balance of power and raise the specter of whether the judiciary’s decision (and thus power) would be implemented.

The matter is coming to a head; yesterday a judge ruled in favor of a different congressional subpoena issued by the House Oversight Committee asking for President Trump’s financial and business records. Special Counsel Robert Mueller is in talks with House Democrats to testify in a closed-door hearing.

A legal fight over the multiple House investigations would keep a cloud of suspicion over the White House, something the president can ill-afford politically. Many foreign policy experts lament that foreign policy stops at the water’s edge, meaning that foreign relations are often an extension of domestic political needs instead of based on their own sound-reasoning. Does the need for a distraction make conflict with Iran more likely?