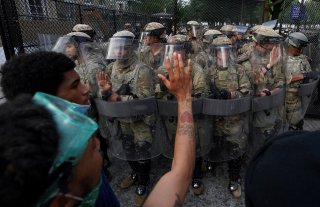 Muscular Pentagon jargon has been misappropriated and wrongly applied to our domestic unrest following the killing of George Floyd. This jargon is a way of avoiding analysis and thinking at the best of times. These are not the best of times. “Dominating the streets,” “battlespace,” “insurrection” and others are dangerous when glibly applied to the expected conduct of our law enforcement and military organizations. These terms work in opposition to the demands of protecting freedom of speech and peaceful assembly while simultaneously protecting the safety and security of people and their property from those who wished to disrupt for politics or profit.

More than twenty-five hundred years ago in the world’s first democracy, Socrates called on Athens’ “Guardians” to “be at once dangerous to our enemies but kind to our friends.” General Mattis’ “No better friend, no worse enemy” charge to his U.S. Marines is the modern interpretation of this concept.

But how to do this? What does this look like on the ground? We have some history to guide us, drawn from both domestic and foreign events.

In late April 1992, a California jury acquitted a Los Angeles policeman accused of beating Rodney King. Like Floyd’s case, it was captured on video. Legitimate protests were soon accompanied by looting and arson as social order collapsed. Different groups and different neighborhoods were drawn into an “all versus all” situation as self-protection became imperative. Law enforcement from several nearby jurisdictions and the state police pitched in to help, but it was not enough. The governor mobilized and deployed California National Guard forces but more was needed. President George H. W. Bush invoked the Insurrection Act to federalize the National Guard forces and add Army and Marine Corps forces from Fort Ord and Camp Pendleton, respectively. Joint Task Force Los Angeles, also known as JTF LA, was formed on the fly based on handshakes and eye contact as the command post gathered at the old Naval Air Station Los Alamitos.

The mayor of Los Angeles and the governor were asked for their site protection priorities. They each quickly provide a list with completely different places. A quick check on these places revealed no threats and no interest. Initial reconnaissance made by walking around in the affected neighborhoods, meeting protestors, and chatting with residents was more productive. We gained a sense of initial priorities. Many had no cars, so the continued operation of neighborhood groceries within walking distance was vital. Gas stations were important for those with vehicles, and a critical vulnerability for their obvious conflagration potential. The safety and security of emergency services, specifically fire and medical response, completed a triad. So we guarded groceries, gas stations, and emergency services and their personnel.

Many soldiers and Marines in our JTF called this area home. They had ties to communities and local organizations. Their knowledge of the area and their ability to access their former networks were irreplaceable.

Less happily, on our walk-arounds we discovered just how well armed Los Angeles is. And these were the folks who were concerned only with protecting their lives and property; they didn’t plan to protest or make mischief. Automatic weapons were not unusual but we found less evidence of any weapons training. The old doctrinal prescriptions to put troops into tightly packed lines to clear streets or parks invited disaster. The adage “don’t bunch up” remains valid and critical. More importantly, it showed the importance of re-establishing a degree of order quickly to avoid more widespread and chaotic armed violence.

Los Angeles and its contiguous neighbors cover a lot of territory with a large, diverse, population. There was no way that armed strangers—about ten thousand guardsmen, two thousand soldiers, and fifteen hundred Marines—were going to bring order out of chaos ourselves. We didn’t even try. From our earliest contact, we worked with local leaders to stay aware of developments, adjust our practices, and help as much as we could. The local leaders at all levels could most efficiently distinguish between legitimate protesters and criminals and reduce the violence. Gradually things came under control.

Some measures of effectiveness were unanticipated. We planned to sustain our forces with military rations but not many were needed. Residents in the various neighborhoods brought home cooking to the soldiers and Marines on their posts, expressing their gratitude for our efforts to provide a level of safety.

Everything did not go perfectly, and continuous adjustment was needed as the situation changed. But with generally cooperative help across all sectors, the situation improved. JTF LA turned its efforts then to get out of the area before we overstayed our welcome. That was more difficult than anticipated but bureaucratic challenges were eventually overcome.

A contrary example is the Gwangju Massacre, March–May 1980 in the Republic of Korea. A series of events motivated students at the university to march on Seoul Station to demand reform, including freedom of speech, press, and free elections. General Chun Doo-hwan’s military dictatorship deployed forces and the confrontation became exceptionally violent. The armed forces “dominated the battlespace” in today’s jargon. Sources vary on casualty estimates, but all are high. Korean military colleagues I know shared their anguish at the time with this use of the armed forces against their own young people. This massacre became a turning point and accelerated the move toward the vibrant, active democracy that Korea is today.

In May 1998 students at Indonesia’s Trisakti University rioted, and six hundred students were killed at the hands of the Indonesian Army. Massive criticism followed. At one point during the unrest, the Indonesian Marines were committed to the effort. They were generously praised for their approach. When I had the opportunity to talk to their leadership later, I asked their senior officers how they did that. Their concept was that the students were not the enemy. The Marines’ leaders put their civvies on, met quietly with the student leaders, and worked out rules of engagement. The students conducted their protest and order was maintained without violence.

We ask a lot of those who choose to serve. The most critical demand is discrimination in the use of deadly force. Similarly, the leaders of our armed forces, in uniform and more important the civilian leadership, must not place our forces in an untenable situation, requiring the forceful, unthinking suppression of fellow Americans expressing their opinion. The forces must be dangerous to our enemies but their countrymen are not the enemy.