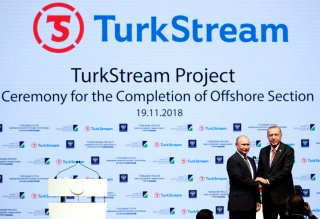 The massive tubes that stretch across Bulgaria, at first glance, appear benign. Traveling like an earthworm both beneath the soil and over land, the so-called Balkan Stream gas pipeline futilely tries to avoid drawing attention to itself. This pipeline, though, is not akin to an earthworm burrowing its way through the Balkans, but a snake—one with deadly venom.

If you haven’t heard of the Balkan Stream, then chances are you know this pipeline by its proper name, TurkStream, which originates in Russia, runs under the Black Sea, emerges in Turkey and then on to Bulgaria. Renaming the pipeline was a Potemkin effort by Bulgarian prime minister Boyko Borisov to camouflage its connection to the Russian pipe, the inauguration of which would subject Bulgaria to Russian president Vladimir Putin’s whims and isolate my country from the democratic West.

That is because the United States intends to sanction anything that touches TurkStream, and for good reason as the pipeline’s sole mission is to cripple Putin’s enemies and finance his corrupt regime. The fact that TurkStream infrastructure has penetrated Bulgaria is an undeniable victory for the Kremlin—but the victory can be made hollow. In March 2021, the Bulgarians will head to the polls and to avoid future sanctions, reject Putin’s nefarious aims, and stand with our European and U.S. allies, the next governing coalition in Sofia must ensure that the Bulgarian section of TurkStream will never carry Russian gas.

Doing so would bring manifest benefits, with one of the most important being the avoidance of U.S. sanctions. While the penalties would likely be placed on individuals or entities that facilitated TurkStream’s construction, the whole country would suffer. Former Secretary of State Mike Pompeo made that much clear over the summer when the State Department updated its sanctions guidance to target TurkStream.

“It’s a clear warning to companies aiding and abetting Russia’s malign influence projects will not be tolerated,” Pompeo said in July. “Get out now, or risk the consequences.”

The consequence of being cut off from the world’s largest and most dynamic economy is bad enough, but perhaps equally damaging is the pariah status associated with being on the wrong end of Washington’s Treasury Department. When investors and benefactors think of U.S. sanctions, countries that come to their minds include Belarus, Venezuela and North Korea.

Being in the same league as those countries offers Bulgaria nothing, just like TurkStream. Putin’s pipeline fails to meet even the lowest threshold that should be applied to new energy projects in a country like Bulgaria, which is to diversify energy supply. Currently, more than 75 percent of Bulgaria’s natural gas imports come from Russia, and TurkStream would only deepen that dependence, allowing Putin to cut off Bulgaria’s energy supply at will. As Borisov embraces TurkStream, he apparently is rejecting a pipeline that would connect Bulgaria to a Greek Liquified Natural Gas (LNG) terminal that would allow Bulgaria to more easily access LNG from countries like the United States, which is increasingly shipping gas to Europe.

What makes this frustrating predicament even more troubling is that Borisov has invited this reputational and economic risk with no reward in sight—at least not for the Bulgarian people. The only conclusion one can draw is that Borisov is acting as an accomplice in Putin’s gambit to impoverish his enemies and install a monopoly on European gas supplies. Like some of Putin’s other pipeline projects, TurkStream is notable not for the countries through which it runs, but the one it avoids: Ukraine.

At the moment, Russia relies on much of Ukraine’s existing infrastructure to send its natural gas to European markets. But Putin is also working to destroy Ukraine by illegally occupying its territory and supporting an insurgency in the country. For Putin, the goal of TurkStream is to punish and pauperize Ukraine. The fact that he can spread various pipeline construction contracts to his cronies is simply an added benefit. By inviting TurkStream into Bulgaria, Borisov has fed this rampant corruption while working against the transatlantic goal of strengthening Ukraine and its institutions as Kyiv resists Putin’s conquest.

The best and easiest way to ensure that Putin’s harmful ambitions are foiled is for the next Bulgarian government to ban Russian gas from ever entering the new pipeline. Doing so will help Bulgaria stave off sanctions, forge closer ties with the United States and its friends in the EU and show that it won’t stand for Putin’s bullying. In essence, this pipeline has turned Bulgaria’s coming elections into a referendum on whether Bulgaria should assist Putin in waging economic warfare against Russia’s neighbors. Fortunately, that question has an easy answer.

Pavel Valnev is the deputy chairman of Republicans for Bulgaria.