Why Ukraine Is So Eager to Talk with Joe Biden 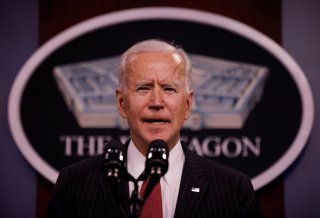 One could be forgiven for ignoring Ukraine last year. The news was one setback after another for the country’s reformist aspirations. President Volodymyr Zelenskyy dismissed his reform minded government in March and things went downhill from there. By the fall, the country had fallen into a constitutional crisis and defanged a signature anti-graft requirement that its public officials disclose their assets online. Most critically, Zelenskyy had failed to bring the oligarchs under control. Most Ukraine watchers were positively downbeat by the end of 2020.

However, Joe Biden’s new presidency has woken up the Ukrainians, and if President Biden plays things smartly, Kyiv’s eagerness to restore a warm relationship opens an opportunity to move Ukraine closer to the West.

Biden’s presidency offers a chance to change the U.S.-Ukrainian relationship after the wreckage of the Trump administration. Trump brought the eastern European country into U.S. domestic politics just a few months after Zelenskyy was inaugurated. It was awful, and Zelenskyy has every reason to distrust Washington. However, Zelenskyy has said that he wants to make history and he seeks the international prestige that comes with a close relationship with the United States. For weeks now, Zelenskyy has sent numerous private and public messages; call me! He desperately wants a phone call with the new president.

But these weren’t the only signals that Kyiv sent to butter up Biden. Observers, Brooke first among them, spotted at least four more.

First, Ukraine launched a criminal investigation into meddling in the 2020 U.S. presidential election on January 28. It will likely result in nothing, but signaling matters.

The next day, January 29, Kyiv banned four Chinese companies, including Skyrizon Aviation, which were trying to take over Ukrainian airplane engine manufacturer Motor Sich with a Ukrainian businessman. Zelenskyy’s decision came after the United States had added Skyrizon to a list of companies that threaten U.S. national security.

Then came an important phone call but not the big one. On February 1, U.S. Secretary of State Blinken and Ukraine’s Foreign Minister Dmytro Kuleba spoke, and Blinken promised that Washington would continue to sell lethal defensive weapons to Kyiv. But after all that Ukraine went through in 2019, Kyiv needs reassurances from the commander in chief, and the charm offensive continued.

The same day, Zelenskyy’s Servant of the People expelled Oleksandr Dubinsky, a lawmaker and former media personality with close links to oligarch Ihor Kolomoisky. Dubinsky was expelled after he was put on a U.S. sanctions list for Russia-linked meddling in the U.S. election. Expelling him was a very good thing, but Dubinsky never should have been included on the president’s team in the first place. Tossing him out was one more way to show Washington that Zelenskyy is paying attention.

Finally, on February 4, Zelenskyy banned three Ukrainian television stations, 112 Ukraine, News One, and ZIK, that promote Russian propaganda. While the three stations make up less than six percent of the market share, they are far more important for news. The decision to sanction the owner of the three stations is the first decisive act Ukraine has taken since 2015 to limit Russian propaganda efforts on the airwaves. Many Ukrainian commentators suspect that the move was political: Zelenskyy’s polling numbers had been falling and Opposition Platform, For Life’s numbers were trending upward. This was a way to dig into their support by undermining his opponent’s mouthpiece. (The real owner of the Novyn new media holdings, Viktor Medvedchuk, is the head of the political council of the Opposition Platform, For Life political party and Vladimir Putin’s chief agent in Ukraine.)

Zelenskyy seems to have convinced the Rada to step up, too. They recently greenlighted two bills that would reform institutions the West has complained about for years.

On January 28, the Rada passed a bill in the first reading that would strip the Security Service of Ukraine (SBU) of its powers to investigate white-collar crime and corruption. The SBU remains unreformed and highly problematic. Its large economic crime and corruption department strikes fear in the hearts of legitimate business and is well known for corporate raiding.

The next day, parliament pushed through a bill in the first reading that would begin the privatization process of Ukroboronprom, the unwieldy defense conglomerate that is routinely accused of corruption and gross inefficiencies. If approved, it might mean that Ukraine has a chance to move past its old Soviet-style secret factories and plants and build a modern defense sector.

Zelenskyy wants a phone call with Biden, and he deserves it after everything Ukraine went through in 2019. Some observers have asked if Kyiv’s latest moves signal that Zelenskyy is decisively embracing Washington and the West. This is doubtful given all of the entrenched interests and Zelenskyy’s inability to contain them. But Biden has a real chance to reset relations by embracing Kyiv while firmly insisting on real reform progress that includes cleansing the courts if he picks up the phone now.