Will the Blob Win the Russo-Ukrainian War? 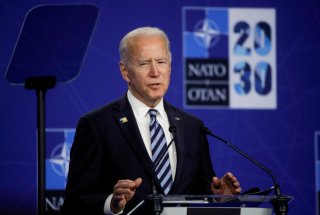 THE RUSSIAN invasion of Ukraine is a wonderful gift for the U.S. foreign and security establishment—and, by the same token, risks becoming a disaster for the United States. Rarely have the interests of the “Blob” and those of the American people diverged so radically. Rarely too has the distinction between what the policy elites should do and what they most probably will do been so stark.

The war permits a return to the full spirit of the Cold War—paranoid, perpetually mobilized, and militarized—for which the Blob has been yearning ever since the Cold War ended. The military can go back to full support for NATO. The arms industry can produce limitless numbers of tanks and heavy artillery; immensely profitable weapons for whom there has been little real use for the past thirty years. The CIA can pursue regime change in Russia and other states of the former USSR. The idea of European strategic autonomy has been killed stone dead. All are now flocking, panic-stricken, back into full dependence on benevolent Uncle Sam.

The irony here is that the Russian army has demonstrated very convincingly in Ukraine that it poses no threat at all of invading NATO, while the idea of it attacking the United States itself is ludicrous. Since the end of the Cold War, Moscow never did have this intention. Now, through its miserable failure in Ukraine, it has also demonstrated that it does not have the capability. If the U.S. security establishment were to follow the objective lessons of the Ukraine War, it could radically reduce its commitment to NATO and leave the defense of Europe to the Europeans. Indeed, in terms of a conventional military threat to the West, we could almost afford to ignore Russia altogether.

The Russian invasion of Ukraine began as an attempt to overthrow that country’s government and return that country to the status of a Russian client state. However, since the Russian army was beaten back from Kyiv, the war has become something very different: a post-colonial territorial dispute on the periphery of Europe. Anyone who is old enough to remember the days when the Soviet army stood in the middle of Germany must understand the essential difference.

The Biden administration was quite right to help Ukraine to repel Russia’s invasion, and to impose extremely harsh economic sanctions on Russia; but since Russia’s maximal goals have already been defeated, Washington can now aim at a limited territorial compromise that will end the war and permit Ukrainian reconstruction. The key task will then become giving the maximum help to Ukraine to help it move toward the West socially, politically, and economically. Achieving this will not, however, be a task principally for the United States, but for the Ukrainians themselves and for the European Union.

There are several good reasons for Washington to support a peace settlement in Ukraine, at the cost to Ukraine of areas that Russia has held since 2014 (and were not part of historic Ukraine). The first is the damage that the war and sanctions are doing to the world economy and international stability. Higher global food prices threaten rebellion, state collapse, and even Islamist revolution in important U.S. allies. Higher oil and gas prices risk completely undermining the Biden administration’s attempts to move America away from fossil fuels and limit America’s contribution to climate change. And for those sections of the U.S. establishment that believe in anthropogenic climate change and its dangers, can they really believe that Russian territorial claims in the Donbas come anywhere close to matching climate change in terms of a future threat to America and humanity?

Then there is the danger of nuclear war. Any threat, however limited, that can destroy America and human civilization must by definition be taken seriously. The Russian conventional forces have turned out to be paper tigers, but Russia remains a nuclear superpower. A strategy of turning the war in Ukraine into one to overthrow the Russian government and cripple the Russian state runs an obvious risk of provoking Russian escalation, miscalculation, brinkmanship, and catastrophic accident.

Turning Russia into the great enemy and focus of U.S. action will risk turning U.S. strategy in Central Asia, Syria, and western Africa away from the struggle against the Islamic State (ISIS) and towards abolishing Russian presence and influence. Only ISIS can benefit from such a shift; and if the Biden administration retains any shred of its previous declared commitment to a “foreign policy for the middle classes,” then it should remember that Islamist terrorism continues to threaten ordinary Americans in a way that the Russian army assuredly does not.

Finally, there is China, which is a peer competitor of the United States in a way that Russia quite obviously is not. To focus on Russia will obviously distract U.S. attention from China. Perhaps equally importantly, the return of America to a full Cold War-style anti-Russian mindset will distract U.S. attention from those domestic reforms that are essential if America is to compete successfully with China in terms of economic performance, national solidarity, and state efficiency.

But then, that is precisely one key reason why confrontation with Russia is so welcome to the U.S. Blob. Strengthening America for successful competition with China requires serious thought, hard choices, civic courage, and real patriotism. How wonderful instead for them to be able to wrap themselves again in the good old reassuring blanket of the Cold War paradigm, which demands none of these things.

Anatol Lieven is a senior fellow of the Quincy Institute for Responsible Statecraft. His latest book is Climate Change and the Nation State (2020).