Will Georgia Ever Join the European Union? 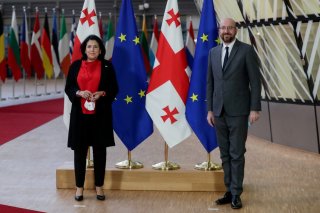 On June 23, the European Council (EC) turned down Georgia’s application for European Union (EU) candidate status, a penultimate step in the process of joining the bloc, sending shockwaves across a country whose politics are defined by the struggle for Europeanization. Adding insult to injury, candidate status was granted to Ukraine and Moldova, despite the fact that Georgia is by many measures the most advanced of the trio. The rejection is said to reflect Georgia’s institutional drift away from liberalism and toward a closer geopolitical relationship with Russia. It also spells a difficult year ahead for the South Caucasian republic as it grapples with the demand for rapid reforms issued by the EU, which is willing to give Tbilisi another chance to bring its famously pro‑European but troubled country into the Western fold.

Since achieving its independence from the Soviet Union in 1991, Georgia has been known for its strong desire to integrate into European and transatlantic institutions to escape the confines of regional geopolitics that have condemned it to Russian domination for the past 200 years. In this century, it has been the most vocally pro-Western country in the region, sending troops to serve alongside Americans and Europeans on foreign missions, signing an association agreement with the European Union in 2014, and achieving visa-free travel with Europe in 2017. In 2008, Georgia fought a bloody war against Russia, which was provoked by the country’s move toward NATO. The Georgian population, consistently and by a large majority, supports joining the European Union and NATO as a fundamental goal and aspiration.

Recently, however, Georgia’s prospects of joining the West are deteriorating due to a government whose strategic allegiance to the West has been put in question. The ruling Georgian Dream (GD) party founded by Bidzina Ivanishvili, a billionaire businessman who made his fortune in Russia, has come under criticism for consolidating its power at the expense of the country’s institutional progress. As some would retort, with or without Ivanishvili, Georgian democracy has never been perfect. Mikheil Saakashvili, the larger-than-life former president and currently an imprisoned de facto leader of the largest opposition party, who ruled the country between the Rose Revolution in 2003 and his party’s electoral defeat in 2012, was also criticized for numerous abuses of power. His United National Movement brought the country closer to the West through radical reforms but eventually alienated the majority of Georgians with its authoritarian impulses. However, GD’s decade-long reign provoked real alarm bells in the West for what observers saw as a power grab at home coupled with geopolitical overtures to Moscow and distancing from Washington and Brussels.

At the same time, the ruling party functions in a political environment in which European integration remains the fundamental aspiration of the population, and Russia is overwhelmingly feared. As Maka Botchorishvili, the GD-affiliated chair of the parliamentary European Integration Committee admitted to us, “the two most sensitive issues for the Georgian public are the European Union and Russia,” and they drive political discourse in the country. The GD government reflected this sentiment by remaining staunchly committed to European integration in its rhetoric and promised to officially apply for EU candidacy in 2024 when presumably Georgia would have been able to submit a convincing application. At the same time, the opposition alleged that the government had no genuine intention of going out on a limb to achieve membership and was instead mainly concerned with maintaining the appearance of trying.

The Russian invasion of Ukraine dramatically changed the game for both the government and the opposition by creating irresistible momentum for immediate action. Following the outbreak of war, Ukraine decided to lodge its own EU candidacy application, hoping to ride the wave created by the sacrifice of its people for a European future, and Moldova followed along. The Georgian government then felt compelled to avoid being the odd one out of the “Associated Trio” that, since last year, united Tbilisi, Kyiv, and Chisinau in their fight for EU membership. Moreover, from the first day of the Russian invasion, tens of thousands showed their support for Ukraine in Tbilisi and other major cities and demanded decisive action from the government. Salome Samadashvili, an independent opposition MP, told us that the invasion forced the GD government to stop procrastinating and confront its faulty record in implementing EU standards. For Botchorishvili and other GD officials, the war has only hastened a candidacy bid that would have been submitted anyway It also put Georgia in an uncomfortable position of having to run two years ahead of its original 2024 schedule and argue its case for candidacy in a situation in which the spotlight and sympathy would understandably be focused on Ukraine.

The outcome of Tbilisi’s bid sent the staunchly pro-European but politically troubled country into an existential crisis. On June 23, the European Council granted Ukraine and Moldova candidate status but refused to do the same for Georgia. Instead, the EU proclaimed Georgia’s “European perspective” which vaguely predicts an eventual candidacy. This de facto rejection was taken very painfully in Tbilisi, as politicians from the government and opposition alike universally admitted to us, leaving the field open to speculation about its causes. For government officials, this disappointment comes down to bad timing, a misunderstanding of Georgia’s progress and position, as well as a historical injustice.

In the prelude to the EC’s negative decision, French president Emmanuel Macron put Georgia in one basket with Armenia and Azerbaijan, saying that “geopolitically and geographically they are not placed today in the same situation” as Ukraine and Moldova. His statement was taken as a sign of a possibly dangerous regression in the perceptions of Tbilisi held in the European capitals. As Botchorishvili pointed out, the EU had already formally recognized Georgia as part of geographic and geopolitical Europe in the 2014 association agreement.

Another possible source of the June disappointment lies in the quality of Georgia’s democracy and institutional order, which has been loudly questioned in the international arena in recent years. However, Giorgi Khelashvili, the GD-affiliated member of parliament and deputy chair of the Foreign Relations Committee, argued that by all EU standards, Georgia is more advanced than either Ukraine or Moldova. For example, he says, “Ukraine is one of the most corrupt countries in the world, while Georgia is in the top 50 least corrupt.” As Khelashvili points out, even officials in the European Commission privately admit that Georgia’s application questionnaire “was by far the best of the three.”

Finally, there is the issue of a moral right to knock on Europe’s doors, which Ukraine understandably claims in the present moment on the grounds of its immense, ongoing sacrifice and which trickles down to Moldova, which has been actively accepting Ukrainian refugees. Here perhaps, Georgians have felt the European Council decision most painfully given that, by all measures, in the recent past they have also sacrificed for a European future. In 2008, Georgia fought a lonely war against Russian aggression prompted by the prospect of joining NATO and has since endured years of Russian economic sanctions and ongoing occupation of 20 percent of its territory. “To us, it seems like blood and sacrifice have an expiration date,” Khelashvili sadly reflected.

While not unfounded, this rhetoric presented by government officials and politicians conveniently leaves out a more complicated reality. Despite obvious arguments in favor of Georgia’s membership, under the GD government, Tbilisi has shifted towards an ambivalent position between Moscow and the West. Analysts have described this policy as a “double game” between pushing for European integration on the one hand and a benevolent relationship with Russia on the other. The government wants to benefit from European and American aid and comply with its population’s desire for integration into Western institutions, but at the same time, it has increased its economic reliance on its northern neighbor. In recent months, Tbilisi has also hesitated to damage its relations with Moscow by fully condemning and sanctioning Russia for the invasion of Ukraine.

On top of domestic rhetoric that caters to socially reactionary forces that present Westernization as a threat to traditional values, all of this must raise concerns in European capitals. While analysts agree that this perception reflects “not a deliberate strategy to change alliances…but rather a sum of tactical decisions dictated by cynical pragmatism” of the current government, it nevertheless hurts Georgia’s prospects of achieving its millennial ambitions. Whether it is more advanced than Ukraine and Moldova or not, Tbilisi can hardly expect Brussels to be comfortable with rewarding Georgia with a candidacy status given this recent record.

The coming year will be marked by uncertainty for Georgia, where a majority demands European integration from a government that struggles to deliver while the opposition seems unable to overcome its divisions and Saakashvili’s controversial legacy. After the EU’s negative decision in June, pro-European groups gathered tens of thousands of people in the streets to demand the government’s resignation. Although the protests fizzled out after a few weeks, a final showdown is still ahead. Alongside its temporary rejection, the European Council presented Georgia with a list of twelve recommendations concerning reforms that the country ought to adopt before a deadline, initially set for six months, to achieve candidate status. Now extended until the fall of 2023, the EU deadline represents a watershed moment for Georgia.