Will Pakistan Capitalize on a New Opportunity to Work with Israel? 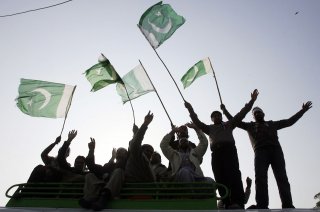 Last September, the Trump administration brokered the Abraham Accords, a normalization agreement between Israel and the United Arab Emirates. Similar bilateral accords between Israel and Bahrain, Sudan, and Morocco have followed. A few more with additional Muslim-majority states that haven’t recognized Israel may be in the pipeline.

It’s not surprising, against this backdrop, that speculation has abounded about possible steps to improve relations between Israel and Pakistan. These are two very different countries that nonetheless share some striking similarities. Both were established on a religious basis, and they are surrounded by hostile neighbors and disputed borders. But they’ve never had formal relations, and Islamabad has long refused to recognize Israel until there’s a Palestinian state. Pakistan is unlikely to join the normalization wave—but it does have a strong incentive to step up more modest forms of engagement with Israel.

On Dec. 15, an Israeli media report claimed that a top adviser to the leader of a “large Muslim-majority” country secretly led a delegation to Israel at the end of November. A London-based Pakistani researcher, Noor Dahri, said this report was true, and he also claimed, in an Israel television interview on Dec. 15, that it was a Pakistani delegation. Meanwhile, several prominent Pakistani media personalities known to be close to the military, which calls the shots on foreign policy, have made public pitches for better bilateral relations.

Prime Minister Imran Khan had acknowledged in an interview in November that he’s under pressure from two unnamed countries to recognize Israel. However, senior officials, including Khan, deny the reports of a Pakistani delegation visit to Israel. And they insist that Pakistan’s position of not recognizing Israel until there is a Palestinian state has not and will not change.

On the latter, they likely mean what they say. Pakistan links the issue of Palestinian statehood to the territorial status of Kashmir—a complex and emotive issue tightly intertwined with Pakistan’s history, and one often described as the country’s “jugular vein.” For Islamabad, recognizing Israel in the absence of a Palestinian state would amount to an abandonment of the Palestinians. Much more importantly, according to the official position, it would also shatter Pakistan’s credibility as a champion of Kashmiris’ right of self-determination.

Furthermore, hardline Islamist figures who despise Israel wield great influence over Pakistani politics and society. Much of the general public bitterly opposes it as well. Additionally, while the intensity of anti-Semitism in Pakistan shouldn’t be overstated—a longtime observer of Pakistan once quipped that because the country is so deeply religious, it’s better to be a Jew than an atheist—such sentiment is nonetheless highly prevalent.

Any Pakistani government that establishes formal relations with Israel, and especially without a Palestinian state, would be committing political suicide.

And yet, the fixation on recognition vs. non-recognition obscures an important middle ground: Because the Abraham Accords opened up more space for engagement between Israel and its rivals, Pakistan now has an opportunity—and a strong incentive—to quietly increase its relations with Israel in ways that fall short of normalization.

A Hidden History of Engagement

Keep in mind that Islamabad’s hands are hardly tied. There’s a precedent for quiet—and occasionally public—Pakistani exchanges with Israel.

According to the scholar P. R. Kumaraswamy, who has studied the history of Israel-Pakistan relations extensively, informal contacts date back to the late 1940s. They have ranged from private meetings in third-party locations to the dissemination of “informative and publicity materials” from Pakistan to Israeli missions abroad. In more recent years, according to Wikileaks, Pakistan has shared intelligence with Israel about the Gulf states and even about security threats to Israel in India.

These covert contacts came out of the shadows in 2005 when the Israeli and Pakistani foreign ministers met publicly in Turkey. Pakistani Foreign Minister Khurshid Kasuri said the meeting signified Islamabad’s support for Israel’s decision to withdraw from Gaza. At the time, Pakistan was led by Pervez Musharraf—one of about half a dozen leaders, military and civilian, who have supported engagement with Israel even in the absence of a Palestinian state. Additionally, according to Kumaraswamy, Nawaz Sharif “contemplated” normalization during his first two terms as premier. During his second term (in the late 1990s), several top leaders of Pakistani religious parties traveled to Israel.

This history underscores that while Pakistan may fundamentally reject Israel’s policies, especially those toward the Palestinians, it does not fundamentally reject the Israeli state itself. As Mirza Aslam Beg, a one-time Pakistani Army chief, put it in 1997: Pakistan has “no direct differences” and “no conflict” with Israel. There is nothing stopping Pakistan from engaging with Israel even while avoiding recognition—and in fact, it has compelling reasons to engage.

First, Pakistan’s foreign policy revolves in great part around countering its archrival India. Islamabad can’t be pleased about New Delhi’s growing defense relationship with Israel. Between 2015 and 2019, India’s arms imports from Israel soared by nearly 200 percent, with New Delhi approving purchases of drones and anti-tank guided missiles, among other types of heavy weaponry (Israel and India normalized relations back in 1992).

With Israel now starting to normalize relations with some Arab Gulf states, many of which are also strengthening ties with New Delhi, Islamabad may fear a geographically expanding India-Israel nexus (in December, Saudi Arabia, the most powerful Arab country in the Gulf, and the UAE both welcomed the first-ever visit by an Indian army chief). Engaging more with Israel gives Islamabad an opportunity to push back against New Delhi.

Additionally, more engagement with Israel can help Pakistan pursue its longstanding objective of playing a balancing role in the Saudi Arabia-Iran rivalry. This is never easy for Islamabad, given its long and deep relationship with Riyadh. But it’s a priority, given that Pakistan shares a border with Iran, has a Shia community that totals 20 percent of the total population, and therefore has no interest in getting dragged into a Saudi Arabia-Iran conflict. Islamabad’s relations with Riyadh have suffered in recent months, with Pakistan accusing the Saudis of insufficiently advocating for Kashmir and Riyadh making a rare demand of Islamabad for an early loan payback. By engaging more with Israel, Islamabad can earn some goodwill with Riyadh, which leads the coalition that favors better relations with the Israelis—even as the Pakistanis continue to pursue more cooperation with Tehran, which most recently resulted in the establishment of a new official border crossing. Pakistan can also balance with Iran, which opposes the normalization wave, by engaging with Israel without extending recognition.

The importance of Pakistan’s economic relations with the Arab Gulf region gives Islamabad another compelling reason to expand ties with Israel. Pakistan is heavily reliant on remittances from the Arab Gulf states, which are home to millions of Pakistani expatriates—including 2 million in Saudi Arabia, 1.5. million in the UAE, and several hundred thousand across Bahrain and Kuwait. In November 2020 alone, nearly half of Pakistan’s total remittances from its overseas workers came from Saudi Arabia and the UAE. Pakistan is also heavily dependent on the Arab Gulf states for hydrocarbon imports. Given Pakistan’s current economic struggles, which stand to worsen due to the pandemic, its cooperation with the region has never been more critical.

And yet, if it refuses to engage with Israel, Islamabad risks tensions with these key Pakistani partners, several of whom have concluded or are pursuing normalization agreements with Israel. According to Faran Jeffery, an analyst who studies security risks in South Asia and the Middle East, the normalization process has prompted some of these states to perceive Pakistanis on their soil as a potential threat. “Imagine if a Pakistani radical carries out an attack against Israeli/Jewish interests in the UAE,” he told me. “That’s something these Arab countries can never afford.”

The UAE’s decision in November to impose a temporary ban on new visas to people from Pakistan and a dozen other Muslim states may offer a cautionary tale. While Islamabad claims the pandemic necessitated the move, initial reportage cited “security concerns,” possibly due to terrorism risks, as the reason. Analysts have asserted that geopolitical factors—including Pakistan’s growing ties with Iran and Turkey, nations that reject normalization with Israel and are UAE rivals—were at play too.

In short, more engagement with Israel has the potential to ease tensions with Gulf states—at a moment when Pakistan’s precarious economic state necessitates smooth relations with these key commercial partners.

Finally, on a purely transactional level, Israel has much to offer Pakistan. Its state-of-the-art agricultural technologies and water management techniques would be useful for Pakistan, a water-insecure nation encumbered by a massively inefficient and wasteful agriculture sector. According to Pakistani water expert Simi Kamal, a whopping 97 percent of Pakistan’s allocated water resources are consumed “to support one of the lowest productivities in the world per unit of water.”

Additionally, Israel’s vibrant IT sector presents collaborative opportunities for Pakistan, which aims to scale up its own promising tech industry—one buoyed by the emergence of seven hundred new start-ups over the last decade and the graduation of twenty thousand IT majors every year.