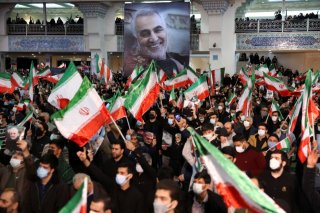 Though Iran has attempted to move towards democracy in fits and starts since the Constitutional Revolution of 1905, any genuine advance forward has been met with unending opposition, mainly originating from influential landlords, conservative circles, traditional Shiite clerics, and other significant social forces. The uncomfortable reality is that despite being a century into its transformation, there are myriad factions, including a large number of ethnic Persian figures and political parties, that have indicated a willingness to give up on the prospect of democracy in exchange for the preservation of contemporary Iran as the successor to the Persian empire of old.

Iranian officials have time and time again stated that they are the last guardians of the Persian empire, and that Iran’s destiny is intertwined with that of the Islamic Republic. During the anti-regime protests in November 2018, the Iranian regime went as far as cautioning the public that people need not protest, as doing so would bring about the country’s collapse and enable external its enemies to “Syrianize” Iran.

Strange as it may sound, this motivation to preserve traditional social structures transcends contemporary political divides. Various opposition forces also hold similar opinions: when the  2019 protests in Iran reached an unprecedented and worrying level—according to a Reuters report, more than 1,500 protesters were killed—the Persian-dominated Freedom Movement of Iran warned that “the collapse of Iran is imminent,” expressing concern that the fall of the regime would coincide with Iran’s collapse. Some secular Persian ethno-nationalists, such as the dissident politician and former minister of information and tourism under the shah of Iran, Daryoush Homayoun, have clearly indicated that they are willing to bear arms and fight on the side of the current Islamist regime if that is what it takes to hold together the Persian empire. The issue is serious enough that scholar Brenda Shaffer, who has extensively written on Iran and its ethnic groups, has contended that “Iran faces the democracy conundrum: in multi-ethnic states where one non-majority group prevails over others, democratization entails risk of loss of empire.”

A significant number of ethnic Persians, including members of the former regime of the shah, who fled the country after the Islamic Revolution of 1979, support the idea of a unified Persian empire at the cost of denying basic rights to the non-Persian half of the population—even if that means condoning the nuclearization of Iran, supporting Iran’s designated Islamic Revolutionary Guard Corps Quds Force, and glorifying its deceased commander, Qassem Soleimani. According to a report in the Washington Post, Ardeshir Zahedi, the last ambassador of Iran to the United States and the former son-in-law of the shah, “sometimes spoke favorably of the new regime, defending the country’s nuclear program and praising Quds Force commander Qasem Soleimani.”

The Iranian regime is well aware of both this complex situation and the desire, particularly prevalent among Persians, to preserve “the empire” and rule over non-Persian ethnic groups in Iran and potentially even beyond. This expansionist ideology, commonly referred to as Iranshahr, is often exploited by the regime to justify its military adventurism abroad and suppress domestic dissent voices, especially among non-Persian ethnic groups, who have stronger reasons to push for democracy.

Why do many secular Persian ethnonationalists support the current clerical regime in Iran? The honest answer is that they are deeply concerned over the prospect of Iran disintegrating outright due to deep ethnic inequalities within the country. Ironically, however, Persian nationalists hide this fear when sharing their opinions with Western pundits. Take, for example, AEI scholar Michael Rubin, who has repeated the same argument of ethnic Persians in his writings—including in a recent article with a rather clear title: “Iran Will Not Fracture on Ethnic Lines Like Ethiopia.”

Rubin, though, cannot really be blamed: he, like most other U.S. analysts, policymakers, and DC think-tankers, is not familiar enough with the nuances of Iran’s domestic dynamics and gets his “facts” about Iran from the very same Persian ethno-nationalists who have every reason to present a distorted and biased view on the country’s complex ethnic composition and its implications for the future.

Consider this: because of ethnic inequalities within Iran, Persians are generally more affluent, better-educated, and better-organized. Consequently, they are overrepresented in Iranian diaspora, academia, media outlets, and think tanks. For instance, the Iranian-American journalists and think-tankers who conduct research activities related to Iran at major Washington DC think tanks or media outlets are almost exclusively either ethnic Persians or Persianized Iranians. The latter generally have sympathetic views on Persians and usually harbor unfavorable opinions on non-Persian ethnic groups in Iran because they are insecure about any concept of Iranian “nationhood” which is not exclusively based on the Persian identity.

A holistic approach to future developments in Iran should contain a more balanced view on Iran’s ethnic and other complex domestic dynamics. The Persian factor, too, is equally important. If Persians were to gradually come to embrace an inclusive, decentralized democratic structure for the future of Iran, then democratization efforts would gain momentum. If not, then the disintegration of the country would become a likelier possibility.

Contrary to what experts like Rubin argue, it is not outside of the realm of reality to anticipate that Iran could collapse as a result of what some might call a semi-apartheid system—in place since 1925—and split the country into its constituent ethnic units, including Azerbaijanis, Arabs, Kurds, and Baluch. It is important to recognize the diversity within Iran. Yet, instead of recognizing its multi-ethnic composition, the Islamist regime has further tilted towards Persian ethnonationalism over the last two decades, unofficially embracing the Pahlavi-era doctrine of “One Nation, One Language, One Supreme Leader, One God.”

Recent developments, such as the rise of global identity politics; an international resurgence of ethnonationalism; and the inception of the internet, social media, and other platforms have all contributed to a revival of ethnic identities in Iran. Moreover, Tehran’s Islamization policies have largely backfired among the youth, and as a result, ethnic nationalism has gained momentum within the country. Contrary to most Muslim-majority nations, enthusiasm for Islamist ideology in Iran has been declining for the last two decades. Ethno-nationalist movements are on the rise, and Azerbaijani, Kurdish, Arab, and Baluch groups are demanding equal economic opportunities and cultural and linguistic autonomy.

Iran needs to choose whether it wants to remain an expansionist Persian-Shiite empire (Iranshahr), or transform into a multi-ethnic democracy where Persians and Shiites have no claim over other ethnic, racial, and sectarian groups.

As the regime’s domestic legitimacy is steadily declining and its long-term survivability is in doubt, it remains to be seen what path awaits Iran.