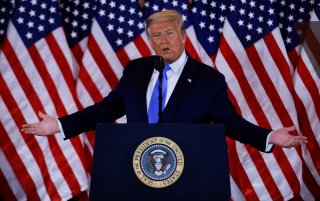 Barring a miraculous turnaround in which he flips Georgia and Pennsylvania back into his column and adds Arizona or Nevada, Donald Trump has lost the presidential election to Joe Biden. Trump can at least console himself that he ran a masterful campaign that, against all odds, came within inches of an electoral college victory.

While Trump’s campaign is accusing some states of widespread fraud, the real slight to election fidelity was committed months ago in plain view when states with little experience hastily adopted mass voting by mail. There is no clear judicial remedy for Trump for this.

Assuming Republicans win at least one of two Senate elections in Georgia, where they have a strong record in runoffs, Biden will be the first Democrat in modern history to flip the White House without carrying both houses of Congress with him. The last was Grover Cleveland in his election to a second, non-consecutive term in 1884.

However, the deregulatory effort that Trump’s agencies have carried out over the last four years is likely to end abruptly and be reversed at great cost to the economy. Biden has already vowed to reenter the Paris climate accord when he takes office, which will raise Americans’ food, housing, heating, and transportation costs while improving the environment little and letting China and India off the hook.

Congressional resistance may also push Biden more toward foreign policy than is typical for a first-term president. Biden’s campaign surrogates spread a soothing tale that U.S. policy on China would remain hawkish, keeping some of the complete reversal on China effected by Trump. However, this contention was more of a campaign talking point than reality. Biden will want an outwardly friendly and businesslike relationship with Chinese leader Xi Jinping, as well as a climate agreement. Xi will expect big concessions on trade and likely get them while lavishing Biden with the pageantry of summit diplomacy.

Trump, at least as of this writing, became the first president since Jimmy Carter to lead a party in losing the presidency after only one term. While we’ve had plenty of one-term presidents, a party almost always gets at least two terms after a switch. Before Carter, one has to go all the way back to the late 19th century to find a similar failure.

What went wrong? During his term, Trump faced impeachment, a special prosecutor, the Democrat “resistance” that allowed him no honeymoon, hesitant congressional Republicans, a disloyal and incompetent original cabinet, and uniform hostility from the federal bureaucracy, the legacy media, Wall Street, and Silicon Valley. Polls that were very negative and very wrong depressed support. Some conservative media turned on Trump. But ultimately Trump’s likely failure came down to coronavirus, staffing incompetence, and fatigue.

Economic history will record as fact that Trump ended a prolonged period of stagnation under his predecessor, achieving strong growth, and real wage increases for all Americans but especially poorer and minority workers. This crashed with the arrival of coronavirus, but most industries other than travel and commercial real estate have recovered.

Trump’s personnel operation was a comprehensive disaster; only coronavirus contributed more to his loss. Trump eventually ended up with stars like National Security Advisor Robert O’Brien (see our event with him here), Secretary of State Mike Pompeo, and Attorney General Bill Barr only after extremely poor earlier choices. Beneath the cabinet-level, Trump benefitted from a small cadre of competent loyalists, but they inevitably had to contend not only with career bureaucrats opposed to Trump, but fellow political appointees who had little interest in advancing the president’s agenda. Miles Taylor, the politically appointed chief of staff at Homeland Security, who published an anonymous op-ed and book to sabotage Trump, is the perfect example.

Voter fatigue also hurt the president, especially in suburban areas that usually lean Republican. His dominance of multiple news cycles per day was just too much for many voters. Some will blame his use of social media, but the public’s ability to know what their president thought was unprecedented in the Trump era and a net plus for him. However, as Conrad Black wrote, “Successful American presidents are never Mr. Nice Guy, though it’s a bonus when… they act the part.” This was unfortunately never an option for Trump, especially with the media he faced.

Trump’s ultimate legacy is that he taught Republicans how to fight. Despite losing, he was more successful than any Republican since Reagan. The lesson is never to apologize for conservatism and patriotism, and never to be on the defense when you can go on offense. Trump also showed that the future of the GOP is in attracting blue-collar workers and larger numbers of minorities, which he did, while keeping the Republican suburbs, which he did not.

Absorbing these lessons is crucial because those who oppose woke progressivism face an almost unimaginably daunting task. Trump’s term exposed that the Left has corrupted every institution in America with politics. McCarthyite political correctness previously centered on college campuses has now spread everywhere. While the mainstream media has diminished itself, its remaining power has been augmented by the expanding tentacles and censorship of big tech. Furthermore, no part of Hollywood will countenance content with any message that isn’t woke and anti-American, and one can count on a single hand the number of major colleges that haven’t surrendered to woke mobs. Ordinary, patriotic Americans are now the counterculture. In addition to fighting a culture war, they will need a political vehicle to prevail, and the Republican Party remains their only option.