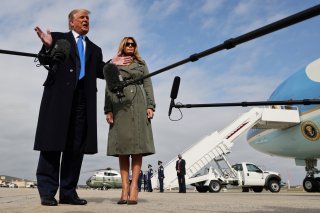 The story of what happened to the Robert E. Lee sandwich, served by a diner in Omaha, Nebraska, is small potatoes by today’s standards. No one needed a ventilator shoved down their throat. No buildings were set on fire, no businesses were looted. And it includes no tweets that urge many millions of American voters to commit a felony. And yet it made the front page of the New York Times, above the fold. It deserves this attention because it is a simple, straightforward narrative that captures the story of parts of the hard Left who are knocking themselves out to ensure that Trump is reelected.

The narrative concerns 11-Worth Cafe, a diner that has been serving what customers describe as “good Midwestern food” for forty-one years. It is a place “popular with a range of clientele—men and women in motorcycle jackets, hospital workers getting off the night shift, musicians nursing hangovers, seniors lingering over a crossword puzzle, local politicians looking to glad-hand regular folks.” Most of the items on the menu have no special name, but one sandwich, which consists of “two sausage patties smooshed between biscuits and smothered in gravy,” is called the Robert E. Lee.

During the nationwide protests after Minneapolis police killed George Floyd, the 11-Worth’s owner’s son posted some very nasty comments on Facebook, advocating shooting rioters and suggesting that people who do not quickly disperse can serve as “target practice.” Protesters decided to demonstrate at 11-Worth Cafe, demanding that the name of the sandwich be changed. The police had to escort the diners from the restaurant past jeering demonstrators. On the second day of this protest, David Mitchell, a protest organizer, met with the restaurant owner and his son, and Mitchell said that the family acceded to the demands of the protesters, pledging to change the name of the sandwich and donate to the Malcolm X Memorial Foundation.

Some protesters objected, demanding a larger donation. Mitchell, their own representative, was concerned that asking for more amounted to extortion. As the day wore on, the protesters remained. On social media, they called for a boycott of the diner and posted negative reviews. Referring to the named sandwich, Precious McKesson, the chairwoman of the Black caucus of the Nebraska Democratic Party, stated, “There’s so much hate behind it, so much hurt. We have to stop normalizing hate and giving people a platform to normalize hate.”

Within days, the diner was forced to close. The family is not expecting to reopen it, as they wrote that they “had numerous threats to all of our family members via social media and two incidents at two of our family homes where the police had to be called.” They also said that staff and customers had “to be escorted to and from their cars by police and security officers for their safety for two straight days.”

Many citizens of Omaha, which, according to the New York Times, could decide an extremely close election since “Nebraska is one of two states in the nation that awards Electoral College votes by congressional district,” are antagonized.

As a White person, I cannot understand the anguish of what it is like to be Black in America. I know about pain and anguish. I survived Nazi Germany as a child, but most of my extended family did not. A very large number of the members of my Special Forces unit, my comrades-in-arms and friends, were killed or wounded in war. I lost a wife to a car accident and a son to illness. I know what it feels like to be discriminated against and threatened—and to lash out. I lashed out at the psychologist who tried to comfort me with banalities, and at the God who abandoned me and my people. If my legs were steadier, then I would march with Black Lives Matter.

This is a special movement. However, no matter how deep and profound and legitimate one’s grief is, one must find the power to guide one’s outrage to expressions that will curtail further, much greater harm and sorrow, for African Americans and the rest of society.

The Omaha sandwich warriors are hardly alone. I believe we should all spend some time, best after taking a Dramamine, in other peoples’ media bubbles. I recently forced myself to wade through the reasons those on the hard Left use to explain why they will not vote for Biden.

One characteristic is common to most of these statements. They do not compare Biden to Trump—the obvious choice on which this election is focused—but, rather, to either the still-loved and missed Bernie or, more often, to an ideal candidate, one who has no personal flaws, never voted for a policy the critics disagree with, and embraces their whole agenda, without missing one iota.

As far as personal flaws are concerned, some members of the hard Left point out that Biden “has been accused by eight women of misconduct, including one allegation of very serious sexual assault.” Seven of these cases concern inappropriate familiarity, such as massaging a woman’s back. The eighth charge is much more serious, but murky.  The accuser’s harassment claims are contradicted by scores of Biden staffers, who worked with him over several decades, none of whom witness such conduct.

Moreover, one must ask if voters should agree that the country is better off with leaders who are good public servants, even if they have some personal flaws. Many may accept another Bill Clinton, a personally flawed president who granted the country eight years of peace, prosperity, and balanced budgets—and one of the very few successful armed humanitarian interventions in American history (stopping the ethnic cleansing in Kosovo). In any case, when it comes to personal qualities—being a family man, empathetic, and devout—there just is no comparison between Biden and Trump. Biden shines.

As to the claim that Biden is old and lacking in stamina and acuity—one of the last times he was asked this question, he was on a bike ride, while Trump was on his couch watching TV. Trump challenged Biden to take a cognitive test and drug test; I suggest Biden should accept if Trump will agree to take a sanity test.

As to policies Biden voted for over the course of his long career, some were indeed mistakes (e.g., voting in support of the invasion of Iraq) and some can be understood in the context of the times, decades ago. The primary debates showed that most candidates who have experience in public service have a mixed record, and the public must allow them to grow and redeem themselves.

With regard to the problem of “only” offering to embrace part of the left agenda, one notes that Biden has leaned quite far, to his peril. For instance, he is committed to adding a public option to Obamacare, allowing all those who wish to join a Medicare-like plan to do so. He also is committed to lowering the Medicare eligibility age to sixty. It seems that none of this will satisfy the hard Left. Typically, the most often cited progressive leader, Rep. Alexandria Ocasio-Cortez (D-NY), a progressive leader, called Biden’s proposal “almost insulting,” noting that, four years ago, Hillary Clinton was considering reducing the Medicare eligibility age to fifty.

Others complain that Biden “still refuses to support a Green New Deal.” However, after Biden released a new climate plan, he garnered the support of many progressives, including climate activists and labor unions.

All this moved me to write the following to the hard Left:

I understand that there are four major reasons some progressives do not plan to vote for Biden. They are concerned about policies he supported in the past, his current connections to the establishment, his character, and his stamina. I read carefully various texts spelling out these concerns.

While I found some of them overstated, I did learn that many of these concerns are basically valid. Thus, I suggest that you make a list of the matters that concern you most. Then, next to each issue—whether racism, social injustice, the climate, or the survival and health of millions of Americans—write what Trump would do versus what Biden would do. I believe that then you will see that there is a clear and compelling choice: It is not the great upside of Biden, but the great downside of Trump.

Additionally, consider that, if all that President Biden does over the next year is launch a national drive to curb the pandemic, which is needed to restart the economy, the greatest beneficiaries of such a policy would be those who now suffer most—people of color, the poor, and the working class. Such a policy would save hundreds of thousands of lives and many millions of livelihoods.

In 2016, 12 percent of Sanders supporters voted from Trump—enough to ensure his election. Many key districts and states were decided by a small number of votes. Your vote matters a great deal.

Amitai Etzioni is a University Professor and professor of international affairs at The George Washington University. Join him at civildialogues.org