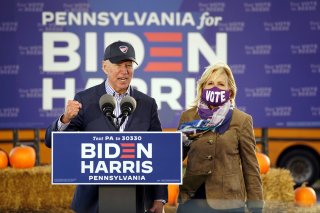 Democratic nominee Joe Biden’s pledge to “transition from the oil industry” at the final presidential debate Thursday night sounded the alarm for GOP lawmakers and potentially swing state voters, as even Biden acknowledged it was a “big statement.”

President Donald Trump led the exchange by asking the former vice-president, “Would you close down the oil industry?”

“By the way, I would transition from the oil industry, yes,” Biden responded.

Biden quickly tried to clean up the mess of comments brewing after the debate regarding his “transition” stance when he told reporters, “We're getting rid of the subsidies for fossil fuels, but we're not getting rid of fossil fuels for a long time.”

Hydraulic fracturing, or fracking, is a method of removing natural gas from the ground—a process that involves drilling that pumps water, sand and chemicals into the ground, which fractures rocks and releases natural gas, and it has enabled the United States to boost oil and gas production in several states, including battleground states that will likely determine the election results.

What Would A Fracking Ban Do?

Although Biden has reiterated that he doesn’t support banning fracking, a potential “transition” from the industry suggests an eventual plan to abolish it.

A complete ban on fracking would create widespread job loss in the gas industry, according to a report by the U.S. Chamber of Commerce’s Global Energy Institute published in December 2019. The report concluded that a ban in 2021 would produce a loss of 5.9 million jobs in nearly seven states in just four years, with about 600,000 job losses in just Pennsylvania—a crucial swing state for the upcoming election. Pennsylvania acts as a main state in the fracking revolution, as it ranks second behind Texas for the country’s top gas producers.

The American Petroleum Institute (API) reported that fracking has contributed more than $37 billion to Ohio’s economy and supported more than 260,000 gas and oil industry-related jobs in a single year, discovering that all fifty states somewhat benefit from the industry.

Biden’s campaign sought to save the day and alert swing-state voters that his plan does not push for the complete elimination of oil and gas. “It’s not true. He would not get rid of fossil fuels, but he would get rid of the subsidies they receive. And part of his strategy to transition to net-zero emissions is to make significant investments in carbon capture and sequestration,” Biden campaign spokesperson Bill Russo said in a statement on Friday.

But the former vice president’s most recent remarks add to the initial confusion that voters had over his fracking position, as he told Pennsylvanians during his campaign trail that he would not ban fracking but sided with Sen. Bernie Sanders (I-Vt.) in March to ban all fracking. Moments later, however, Biden clarified “no more—no new fracking.”

What is Biden’s Climate Change Proposal?

In Biden’s climate change proposal, he calls for clean energy and net-zero emissions by 2050, in addition to a ban on all new oil and gas permits on federal property.

But Biden’s “big statement” at the debate isn’t out-of-line as to what his climate change plan proposes. To reach net-zero emissions in just three decades, his plan targets widening the reach and ability of renewable energy to provide an alternative to fossil fuels. He has noted fossil fuels will help the “transition” to renewable energy.

It’s understandable, however, that swing-state voters—especially in states like Pennsylvania and Ohio where fracking rests as a top issue—are concerned with Biden’s overall stance on the matter. His own running mate, Sen. Kamala Harris (D-Calif.), said back in September that “There’s no question, I’m in favor of banning fracking,” as she serves as a co-sponsor of the Green New Deal resolution, which focuses on terminating fossil fuels.

The Consequences of Biden’s “Big Statement”

Biden’s comments at the final presidential debate ignited a whirlwind of pushback from GOP lawmakers, as well as from Trump, considering fracking is a major issue in competitive states in the 2020 election.

Just after the debate, Trump tweeted a video that compiles Biden’s inconsistent remarks on fracking, as he says he’ll “make sure it’s eliminated,” and tells voters “I guarantee you we’re gonna end fossil fuels.” The president also aired a new advertisement in Pennsylvania that broadcasts Biden’s confusing comments on the climate issue to attract voters to back his re-election bid, as it notes that a Biden administration would “end fracking” and be “devastating” the state.

Trump’s campaign manager Bill Stepien even told reporters that Biden’s comments “put the nail in the coffin” for his candidacy in Pennsylvania and potentially Ohio and Minnesota, as all three states have voters who value the preservation of fracking as it dominates the job and energy markets.

“It is impossible to campaign in places such as Pennsylvania and try to be both things at once. You cannot be Joe from Scranton who cares about American workers’ jobs, people who work in the fracking industry, and have AOC writing your climate change policy at the same time,” Tim Murtaugh, Trump’s communications director, said, referring to progressive Rep. Alexandria Ocasio-Cortez (D-N.Y.).

Where Voters Stand On Fracking

A survey released by the API over the summer revealed that access to energy resources is an important issue to Florida voters, as 70 percent of the state’s voters “say they get value from natural gas and oil and think it will play a large role in America’s continued energy needs.” The results also indicated that 65 percent of the Sunshine State’s voters are more likely to vote for a candidate who supports access to oil and gas produced in the United States.

Some voters balk at backing the vice-president, because several swing-state residents actually benefit from fracking, including landowners who raked in royalties from companies using their lands to drill, as well as services that tend to support the gas industry.

During Trump’s campaign season, some workers have actually endorsed the president, like the Boilermakers Local 154 union for his pro-fracking efforts to preserve the field. At the ABC News town hall event last week with Biden, the former vice-president claimed that the boilermakers actually endorsed his own presidential bid, but it clearly did not.

Although oil and gas production has been a major concern for voters, an August CBS/YouGov poll revealed that 52 percent of sampled registered voters in Pennsylvania oppose fracking.

While it seems that battleground state voters are divided on the issue of fracking, it’s unclear how much of an impact Biden’s position will have on the 2020 election, as millions of Americans have already voted and the coronavirus pandemic and economic crisis have been controlling the election season.

But both John Fetterman, the state’s lieutenant governor and Bill Peduto, Pittsburgh’s mayor—who are Democrats—told the New York Times in January that any ban on fracking could destroy all chances of a candidate winning the state’s support.

“If Texas was ever moving purple this moved it right back to red,” Lanza added. “In Pennsylvania, it reinforces the fears that they’ve had about this guy.”

The final presidential debate was the last time Trump and Biden would appear on a stage before Election Day in a seething race for the White House that still remains up-in-the-air.