How Progressive Is Joe Biden? 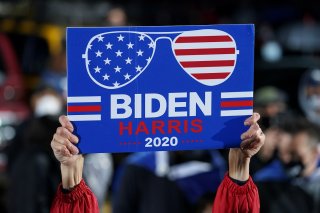 In the Democratic presidential primary race, early rivals of Joe Biden dubbed him a moderate candidate. Progressive groups and lawmakers sided with Sens. Bernie Sanders (I-Vt.) and Elizabeth Warren (D-Mass.) in the early days of presidential campaigning. Sen. Kamala Harris (D-Calif.) has been labeled as one of the most liberal members of the senate.

So for many progressives, placing Biden instead of someone like Sanders in the spotlight for the Democratic presidential nominee was anathema.

Biden, who’s identified himself as a unity candidate for this year’s presidential election — ideologically — has made some more “moderate” decisions during his political career. As Vox’s Matthew Yglesias writes, he’s the “guy who voted in favor of the invasion of Iraq, of multiple pieces of legislation deregulating the banking industry, of the 1994 welfare reform bill and of the ‘tough on crime’ 1994 criminal justice bill” -- the latter has haunted him, especially in the 2020 race for the White House.

The former vice-president’s transition team has also initiated screening Republicans for potential cabinet positions under a Biden administration — a move that received avid pushback from far-left advocates and lawmakers. The team argued that “diversity of ideology and background is a core value of the transition.”

What’s more, some Republicans who voted for President Donald Trump in 2016 are flipping to back Biden on Nov. 3. In short, it’s tempting to see Biden as a moderate candidate compared to early Democratic rivals who could have been leading the party to try to kick Trump from the White House. “He is moderate — a practical politician, not an ideologue, eschewing left-wing favorites such as the Green New Deal, Medicare-for-all and defunding the police,” The Washington Post’s Dana Milbank writes.

But In truth Biden’s political agenda is unexpectedly progressive.

But Just How Progressive?

“The world is different; there’s too much unfinished business for us to just look backwards. We have to look to the future. Bernie understands that, and Joe understands that,” former President Barack Obama said in a video when he endorsed Biden as president. "It is one of the reasons that Joe already has what is the most progressive platform of any major-party nominee in history. Because even before the pandemic turned the world upside down, it was already clear that we needed real structural change.”

In terms of climate change, Biden calls for clean energy and net-zero carbon emissions by 2050, as well as a carbon-free power sector by 2035.

Varshini Prakash, the co-chair of the progressive Sunrise Movement, praised Biden’s climate change agenda, saying that “we now have a Democratic unity position that begins to reflect what young people have been shouting relentlessly — that the climate crisis is not some far off threat.”

When dealing with fracking, Biden has been labeled as a flip-flopper on the issue, as he’s provided unclear stances on the matter. He has, however, emphasized that he wants to ban all new oil and gas permits on federal property.

The former vice-president was ripped by the GOP last week when he pledged to “transition from the oil industry” at the final presidential debate, acknowledging it was a “big statement.”

On health care — in the event that the Affordable Care Act is repealed — a Biden administration would “build on the Affordable Care Act by giving Americans more choice, reducing health care costs and making our health care system less complex to navigate,” according to Biden’s own campaign website. The plan offers a public option — which will spike competition among private insurers — that individuals could opt-into instead of purchasing private insurance externally or through an employer. It also expands coverage and reduces premiums primarily for middle-class families, as they would receive a premium tax credit to aid health coverage and ultimately reduce overall annual health care spending per family.

The agenda would also automatically enroll low-income Americans in the public option and works to provide aid for long-term care, rural health and mental health practices.

“The Democratic party and its big donors have moved aggressively to the left, especially on issues like climate change, health care and racial justice. Part of that is a reaction to President Trump, who has moved the Republican Party to the center,” John Feehery, Republican strategist and columnist at The Hill, said. “Biden is not strong enough to stand up to the left. He doesn't have the energy or the ability to offer a counter-vision, which is why he has largely acquiesced to their demands.”

There have also been talks that Biden’s transition team is considering both Warren and Sanders in top cabinet positions under a Biden administration.

“Certainly, Biden has a progressive agenda in ways — he speaks of transitioning off fossil fuels, adding a public option to Obamacare, increasing taxes on the affluent, and spending heavily. How much of this campaigning agenda can translate into a governing agenda remains to be seen,” Kevin R. Kosar, a resident scholar at the American Enterprise Institute (AEI), said. “The House of Representatives can be counted on to support these proposals, however, the Democrats will need to solidly recapture control of the Senate to enact them into law.”

Can He Implement It?

Norman J. Ornstein, a resident scholar at AEI, reiterated Kosar’s concerns by saying Biden's “challenge will be first and foremost finding a way to get legislation of any sort through the Senate. Can he get the [six to eight] Republican senators he believes will work with him and not filibuster? If not, how much can he do through reconciliation and executive action?”

“There is a reason Bernie Sanders has called the Biden agenda the most progressive ever. Because it is. And I think it is largely because of those promises that Biden loses next week,” Feehery added.

But while his agenda does speak to a more progressive base, experts have suggested that Biden’s ideology has shifted, just as the Democratic party has shifted.

“I think on some issues yes, on some issues no, depending largely on where the political spectrum as a whole has shifted,” Stan Veuger, a resident scholar in economic studies at AEI, said.

Ornstein added that “Biden's agenda is marginally more progressive than most past Democratic presidents or nominees, but that is in part because the center of the political system and of the party have shifted. That leaves him more in the center-left of the country, and in the middle of his party.”