Joe Manchin Once Threatened to Support Donald Trump. Now He Backs Biden for 2020. 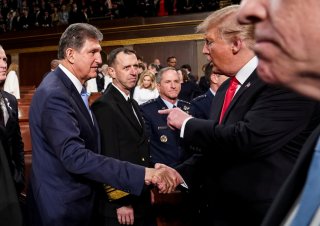 In the Democratic primaries, Joe Biden campaigned as the most electable candidate, the man who could unite both the party and the country against incumbent President Donald Trump. While the November election is still seven months away, the seventy-seven-year-old has succeeded in uniting the Democratic Party in a way his predecessor, Hillary Clinton, never was able to.

Joe Biden has locked down endorsements from Bernie Sanders, Elizabeth Warren, and even a halfhearted one from progressive firebrand Alexandria Ocasio-Cortez. With his leftwing unified, Biden is now swooping in the right as well. Yesterday Senator Joe Manchin of West Virginia, the most conservative member of the senate’s Democratic caucus, said he would endorse Biden after previously teasing possibly supporting Trump in 2020.

“I really don’t rule anything out,” Manchin told Politico in February about offering his support to the Republican incumbent. “I’m always going to be for what’s best for my country. Everybody can change. Maybe the president will change, you know? Maybe that uniter will come out, versus the divider.”

Similarly, Manchin threatened to support Trump in 2016 after Democratic nominee Hillary Clinton said that her administration planned “to put a lot of coal miners and coal companies out of business.” Coal is crucial resource for West Virginia, a state already economically impoverished, and it took a lot of soothing to keep Manchin from crossing the aisle.

Manchin was the governor of West Virginia before being elected to the senate in 2010. Personally popular, he remains possibly the only Democrat able to get elected in a state that usually votes for Republicans by over 20%. Since Donald Trump’s election in 2016, Manchin has been a regular ally on senate appointments, usually voting with the Republican majority. In 2018 he cast the only Democrat vote in favor of confirming Brett Kavanaugh to the Supreme Court, making the decision bipartisan despite the months of prior controversy.

Manchin, however, remains a Democrat. He opposed the president’s 2017 tax plan, all Republican attempts to repeal or restructure Obamacare, and despite speculation, he voted to remove the president from office in Trump’s February senate trial.

That is why Manchin is “absolutely” committed to supporting Biden. “I’m just trying to make sure that we’re working through a plan. I’ve been working and talking to different people. We’re definitely getting there,” the senator said yesterday. “You just can’t leave people behind that did the heavy lifting and that’s worked hard, whether it’s producing coal or producing energy for this country. They just need an opportunity to live their lives and have that opportunity. And I think Joe Biden understands that.”

Donald Trump is now set to face what he was able to avoid in 2016: a united Democratic front.