What’s Next For the Bernie Sanders Movement? 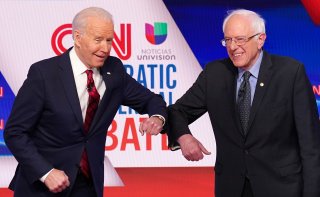 Sanders campaign co-chair Rep. Ro Khanna (D–Calif.) said that “the progressive movement has never been stronger” in a Thursday conference call as he discussed negotiations with former Vice President Joe Biden and the future of the movement.

Sen. Bernie Sanders (I–Vt.) had rallied a huge segment of the Democratic coalition behind his 2020 run for president with an avowedly democratic socialist platform. Sanders has since dropped out of the race and endorsed Biden, who comes from the more moderate wing of the party.

Sanders and Biden have indicated that they plan to negotiate on a platform that brings together the progressive and moderate wings of the party. The two named the leaders of their long-awaited “unity task force” on Wednesday.

Khanna said that he is “hopeful” about the joint committees, but that “the details still need to be fleshed out.”

He added that there has been a shift in Biden’s rhetoric “from restoring decency and the Obama-Biden years to talking about FDR.”

“A shift in frame matters. It’s not to be underestimated,” Khanna said. “He has seen the facts on the ground.”

The representative from California said that the coronavirus crisis has sparked a “realization” among Americans that the country needs universal healthcare, more investment in public health, improved labor rights, better digital infrastructure, and student debt reforms.

“The country has shifted in a progressive direction,” Khanna said. “Politicians are usually lagging indicators, not leading indicators.”

He added that Biden is “astute” and that “it would be irresponsible for the Vice President not to shift his frame.”

The Biden campaign has also invited Sanders advisors to work on foreign policy issues, although foreign policy is not one of the six policy areas handled by the recently-unveiled unity task force.

Khanna, who is close to Sanders on foreign policy, said that his priorities include preventing an “accidental war” with Iran, continuing to push for U.S. military disengagement from Yemen, and trying to “ratchet down the tension” with China.

Khanna also dropped important hints about the future leadership of the progressive movement, which has no singular heir apparent after Sanders.

He said that former presidential candidate Sen. Elizabeth Warren (D–Mass.) could do “a tremendous job in helping to channel progressive policy into the platform” as vice president.

“We need more progressives in leadership,” Khanna added. “People like [Rep.] Pramila Jayapal [D–Wash.] should run, and I would support her.”

The Washington Post had reported that Sanders was quietly urging Biden not to pick Warren as his running back, but the Sanders campaign later denied that Sanders was “advising the Biden campaign's vice presidential selection process in any way, shape or form.”

Warren and Sanders appeared together in a Monday video town hall on coronavirus aid, alongside Jayapal and Rep. Mark Pocan (D–Wis.).