Why China Is Rooting for Joe Biden 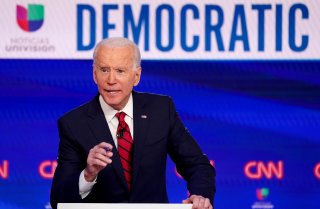 Need another reason why the coming presidential election is of crucial importance to the future of the United States?

The geopolitical stakes could hardly be higher, and America’s adversaries agree. As the FBI Director Christopher Wray and William Evanina Director National Counterintelligence inform us, Russia is betting on Donald Trump and China is backing Joe Biden. The 2020 election has dark implications for U.S. foreign policy. Both Trump and Biden have for the most part accepted that the unipolar moment for the United States is over. America confronts a dangerous, new geopolitical environment of rising regional powers that do not always play nice and an ever-aggressive China with global reach. How the winner of the election responds will have lasting consequences for the future of U.S. national security.

Experts like Graham Allison warn that much of what happens in the world in the coming years will flow from the logic of rising regional powers, their interests, and conflict over spheres of influence. Neither a Trump-led nor a Biden-led foreign policy is likely to reverse the emergence of regional heavyweights; they can only manage them in a way that protects vital U.S. interests. The regional leaders themselves are a cast of characters that do not bend easily to pressure: Hassan Rouhani of Iran, Recep Tayyip Erdogan of Turkey, Vladimir Putin of Russia, or friends like Jair Bolsonaro of Brazil, and Narendra Modi of India.  Trump warns voters that Biden lacks the mental acuity and toughness to engage one-on-one with such “tough guys,” while Biden accuses Trump of being too cozy with authoritarian leaders.

In the new geopolitical environment that Trump or Biden will operate, Europe will continue to politically fragment. Putin will undermine neighbors as in the past—often by interference in elections. For the sake of energy security, the anti-Trump Angela Merkel of Germany appears reconciled to Putin’s Russia and its bullying tactics. In this regard, Trump’s heavy-handed approach to NATO members to meet the 2 percent of GDP spending requirement on defense may come back to haunt him.  Better-armed NATO members may be more prone to pushback against Washington, DC, making containment of Russia more difficult.

Other fault-lines threaten the Old World. France (in support of Greece and Cyprus) is facing off with Turkey as tensions rise over access to undersea natural resources.  Turkey’s strongman Recep Tayyip Erdogan is also clashing with neighbors in the Mediterranean region over Libya, Lebanon, and Syria while threatening to release a wave of refugees upon Europe.  French President Emmanuel Macron’s has responded by building up French air and sea capabilities in the Eastern Mediterranean in order to dissuade Turkey from pushing maritime claims in clear violation of international law.

America’s faithful ally, the United Kingdom, also faces regional challenges in this brave new world.  Cast adrift from the European Union, the UK will need to square off with Ireland, Scotland, France, and Spain over existing borders and migrant issues.  Some predict there might even be a revival of tensions in Northern Ireland.  The optimistic Singapore-on-Thames version of London, with the global financial hub carving out deals between the United States and European Union, will have to wait.

Asia is arguably a more dangerous place than the old continent of Europe in this new dawn of great-power competition. Tensions between North Korea and South Korea will remain high in the foreseeable future. The recent murder and incineration of a South Korean official as part of North Korea’s coronavirus protocols will not help matters. India and Japan will continue to engage China in their respective Cold Wars with no abatement in sight.  Indian and Chinese troops clashed in a Himalayan border area in June, and Japan’s Defense Minister Taro Kono made it patently clear in September that “China has become a security threat to Japan.”

Many of the regional fault lines at present lie off the coast at sea, as Aymeric Chauprade, a former professor of geopolitics at the French l’École de Guerre (War College), observes: “The sea is the new theater of powers in a multipolar world.”  China’s off-shore conduct has antagonized virtually all of Asia and neighboring Australia.  China’s illegal claims over most of the South China Sea sets it on a collision course with neighbors Brunei, Taiwan, Vietnam, Malaysia, and the Philippines.  China’s aggressive takedown of Hong Kong’s autonomy and menaces directed toward independent Taiwan threaten the entire region.  Worse for a Biden or Trump administration over the next four years:  China’s navy now surpasses in number of battle force ships that of the U.S. Navy (350 vs. 293).  The growing might of the People’s Liberation Army Navy (PLAN) should put us on notice, as my colleague James Holmes never tires of pointing out.

Instead of the end of the Cold War in 1991 advancing the liberal world order inspired by the United States, the world today more closely resembles that of the troubled 1930s or even more distant eras that produced savage great power conflicts with names like the Nine Years’ War or the Seven Years’ War—neither of which ended particularly well for those involved.

Trump’s response to the growing danger of regional wars and new groupings of opposition to U.S. interests are summed up in his own words, “we’re no longer the suckers of the world.” For Trump, the response to an increasingly hostile and armed world is a cautious policy of bringing the troops home and off-shore balancing.  His foreign policy team may even adopt “mission-driven partnerships,” as Nadia Schadlow has recently proposed in Foreign Affairs.  In fact, a Trump win in November means overall disengagement of U.S. power from some parts of the world, like the Middle East, and a tougher realpolitik with other parts like China.

A Biden administration will scarcely do better at addressing the various regional conflicts on the horizon. There cannot be a return to U.S. hegemony—at least not how the world remembers it in the 1990s, 2000s, or 2010s.  Contrary to an opinion piece published in the Financial Times that claimed in April 2020 that Joe Biden “is the last, best hope for globalists,” or grounded in the solid analysis of Hal Brands who cautions “to not let great powers carve up the world,” Biden cannot restore the Obama era in any geopolitical sense as some “restorationists” hope, no more than Sisyphus could move the rock to the top of the hill.  According to Thomas Wright in The Atlantic, the “2021 Democrats,” assuming Biden wins in November, “no longer talk about the goal of American foreign policy being a liberal international order, as they did during the Obama years.”  In place of the march toward globalization, made famous by Thomas Friedman’s The World Is Flat: A Brief History of the Twenty-First Century, foreign policy leaders of both parties are more likely to prepare for the world as it is—a world in disarray.

It should be pointed out that Biden does promise that the United States shall remain more engaged than at present under Trump, and he will mend frayed relationships harmed by Trump’s policies. Yet critics will point out that in the new environment not all damaged relationships are worth the effort of saving and some global institutions are more likely to favor Beijing anyway, as recently demonstrated by the downplaying response of the WHO to the initial outbreak of the coronavirus in China.

No question Biden will be tougher on China than former-President Barack Obama, but it is the opinion of this writer that his posturing will not last for long. On the issue of decoupling—bringing crucial supply chains back to the U.S.—Democratic foreign policy leaders seem divided on how far to go, or whether or not decoupling might actually make matters worse.They are also divided on a host of other issues regarding China, like what to do about the crushing of Hong Kong’s liberty and Xi Jinping’s conduct of ethnocide against the Uighurs in western China. Still, there are those like Fareed Zakari, for example, who want to see a Biden administration that will seek cooperation and engagement with Beijing.

The most crucial difference between Trump and Biden is on how to respond to the growing threat that China poses.  While not impotent in his response to China, Biden will prove to be more of a reluctant cold warrior than Trump for reasons mostly beyond his control.

U.S. tech companies have made major inroads with the Democratic Party and Biden campaign. Big Tech is worried about new regulations and antitrust lawsuits, but also decoupling from China and losing China as a market place. One argument made by “big tech” is that breaking them up will open the way for China Inc.’s market dominance and the decline of the U.S. tech sector. In sum, it might be safe to bet that under a Biden administration there will be plenty of U.S. bluster initially when it comes to China, but little actually done.

More pessimistically, a Biden victory may well mark the beginning of a transformative journey. One where the U.S. economy and that of China become more enmeshed than ever. Instead of China being transformed by America, America will become transformed by China—the opposite result sought by the neoliberals since the end of the Cold War. “China has been engaged in a deliberate campaign to re-orient U.S. technology companies towards China,” points out Alex Gallo in The Hill in April 2020. At the height of the trade war, Chinese venture capital flooded Silicon Valley in an attempt to convince U.S. tech start-ups that China is a trusted partner.  As Gallo asks, “What ‘team’ will U.S. tech companies choose?” Meanwhile, Tesla is operating the newly built Gigafactory 3, the first fully-owned foreign car plant in China. A near-term rapprochement made with China during a Biden administration might mean the elimination of Trump-era tariffs and the removal of Huawei from Trump’s “Entity List”, despite deep national security concerns.  A period of détente will prove beneficial for the profit line of U.S. companies, and even U.S. consumers might benefit. But in the long run, who will benefit the most?