Will Donald Trump Make the Same Mistake as Herbert Hoover? 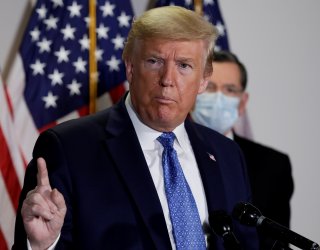 George Santayana famously observed that those who cannot remember the past are condemned to repeat it.

One has to wonder whether the same might not be said of President Trump, as he now ramps up his trade war with China just as the U.S. economy is succumbing to its worst economic recession since the Great Depression. He is doing so seemingly oblivious as to how Herbert Hoover’s lives on in infamy not least for the disastrous consequences of his trade policies during the 1930s.

Herbert Hoover hardly covered himself with glory in the 1930s. Not only at the onset of the Great Depression did he ill-advisedly try to balance the budget with public spending cuts and tax increases. He further exacerbated the depression by championing the passage of the highly protectionist 1930 Smoot-Hawley Tariff Act. That piece of legislation ushered in the disastrous beggar-my-neighbor trade policies of the 1930s, which prolonged the depression by leading to the breakdown of the international trading system.

To his credit, by his prompt and aggressive budget policy response to the economic fallout from the coronavirus pandemic, President Trump is not repeating Herbert Hoover’s budget mistakes. On the contrary, he has responded with commendable alacrity and boldness to the pandemic by signing economic support packages totaling some US$ 3 trillion, or about 15 percent of GDP. Appropriately, this has constituted a very much more forceful response to this economic recession than was the case in 2009 in the aftermath of the Lehman bankruptcy.

Large as the budget response to the economic crisis has been, it remains to be seen whether it will have proved to have been sufficient to promote a sustainable economic recovery especially were we to have a second wave in the pandemic. It also remains to be seen how Mr. Trump would respond to such an eventuality. However, at this stage, he would seem to deserve high marks for his budget response to the crisis.

Since the start of his administration, in fulfillment of his campaign promises, Mr. Trump has taken a tough America First approach to U.S. trade relations with China and he has arbitrarily imposed import tariffs on many other countries. He has done so in a unilateral manner that has undermined the international trade order.

Apparently sensing his re-election strategy to be in trouble as a result of an extraordinarily weak U.S. economy and his perceived poor handling of the pandemic’s spread, Mr. Trump appears to be seeing an electoral advantage in reigniting the U.S.-China trade war. This appears to be motivating him to provocatively blame China for the virus, to place heavy restrictions on Huawei’s use of U.S. technology, and to actively encourage U.S. companies to cut their dependence on Chinese supply chains.

It would never be a good time to re-escalate a trade war with China, the world’s second-largest economy. However, it would appear to be particularly inopportune to do so today when the world is in the grips of a depression and when the world desperately needs American leadership to maintain the open international trade system that has underpinned the US and world’s post-war economic prosperity.

One has to hope that Mr. Trump will soon back down from his highly protectionist rhetoric and not back his damaging words with deeds. If not, we should brace ourselves for a very long road to a full recovery from the economic ravages of the coronavirus pandemic.