‘Island Hopping’ Offensive: The U.S. Marines Are Training for the Worst 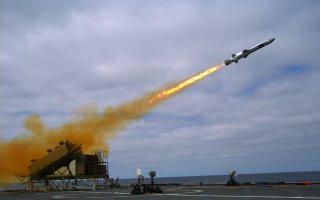 The Marine Corps has been firing off its ship-launched Naval Strike Missile (NSM) arming the littoral combat ship (LCS) from land, a move which establishes a new kind of multi-domain coastal-defense, anti-ship missile kind of land-based weapon. The adaptation of the LCS weapon is intended to support a conceptual shift toward a land-sea kind of “island hopping” offensive attack capability in which the NSM missile would potentially transport from the Marine Corps’s new Light Amphibious Warship.

Some of the NSM’s key attributes, such as range and precision guidance, seem to lend themselves to the kind of multi-domain use now being pursued by the U.S. Marines and the Navy.

According to Raytheon data, the NSM is a 156-in missile able to travel as far as in excess of 100 nautical miles toward targets. The weapon, which first emerged in 2012, features a launch phase solid-propellant rocket motor booster and a sustained flight JP-10 fueled turbo-jet engine enabling subsonic speeds.

NSM has a programmable fuze, which includes an ability to penetrate prior to detonation for maximum destructive effect. It is also specifically engineered with a low radar signature and an ability to operate close to the surface in sea-skimming mode to elude enemy radar.

“It climbs and descends with the terrain and performs evasive maneuvers to counter the world’s most capable defense systems. NSM possesses the capability to identify targets down to ship class—a feature that is vitally important to warfighters who must strike only specific, selected targets in congested, contested and denied environments,” a Raytheon report said.

“A coastal defense solution is something that has been previously fielded in Poland. So it’s not like a new concept for NSM. It’s fielded in Poland and it was recently announced that Romania signed an agreement with the U.S. government to buy the NSM Coastal Defense System. So we’ve taken some of that heritage. We’ve taken what we learned with LCS, combined that and come up with a quick solution for the Marines to integrate on their vehicle,” Randy Kempton, the director of the NSM & Tomahawk Program, told the National Interest.

Defensively, the land-firing of NSM supports the rationale for the Navy’s Distributed Maritime Operations which envisions a much wider, more dispersed, and multi-domain threat envelope, a circumstance driving a need for attacking forces to be less condensed and therefore less vulnerable to enemy fire.

Coastal or island applications of NSM also support the Navy’s effort in recent years to improve an ability to detect, track and destroy incoming enemy anti-ship missiles from much farther ranges than have ever been possible. This is necessary to improve standoff range and counter dangerous new longer-range enemy weapons. Also, with proper networking, a land-based NSM could function as a critical defense “node” within a broader meshed system of sensors, meaning its targeting technology might be in position to find launching enemy weapons and pass the information to allied assets.

What is more likely, however, is that an island NSM might receive targeting specifics from an aerial drone, submarine or ship-based radar system. This is where the offensive comes in, as an NSM could attack and destroy far away enemy surface targets, while ensuring allied surface ships don’t operate within striking range or are properly alerted such that they can launch interceptors such as an SM-6 missile. All of this means amphibious assault ships, supporting closer-in vessels like the emerging frigate or littoral combat ships and unmanned systems will need to be armed with a new, paradigm-changing sphere of long-range weapons as well, including NSM.

In terms of production, Raytheon invested in domestic manufacturing facilities to ensure their capacity to meet the demand signal from the Navy, Marine Corps, and other customers. Because they’re buying the identical missile, using the same contract vehicle, the Navy and Marine Corps actually save money through reduced unit prices and logistics commonality. The Marine Corps’ ground-fired NSM is essentially ready-made for additive manufacturing as it uses the same production line used by the Navy for the ship-fired variant.

“We’ve made a lot of progress in terms of integrating the same exact missile that the Navy is buying,” Kempton said.