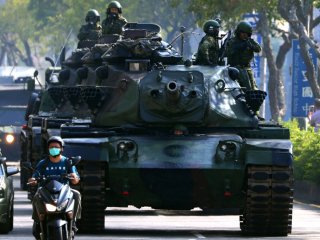 Taiwanese premier Su Tseng-chang claimed on Sunday that his government sought further negotiations over the island’s political status with China, but insisted that the two sides negotiate as equals, according to Reuters.

Su’s remarks came within days of Beijing’s ban of Taiwanese grouper fish over alleged health risks. The government in Taipei has called the ban politically motivated and threatened to file a complaint against Beijing at the World Trade Organization (WTO).

Su emphasized that Taipei continued to hold the mainland in high regard, arguing that “we are willing to engage in goodwill with China … as long as there is equality, reciprocity, and no political preconditions.”

The Taiwanese premier also condemned China for its repeated military incursions into Taiwan’s air-defense identification zone, or ADIZ, which have steadily increased in recent years.

“As for China’s harassment of Taiwan with military aircraft, warships, unreasonable suppression and political actions … the one being most unreasonable is China,” he said. “Taiwan does not want to close the door to China. It is China that has used various means to … treat Taiwan unreasonably.”

According to Taiwan’s unusual political system, Premier Su leads the Executive Yuan, Taiwan’s executive branch, and serves as the island’s head of government. The premier is selected by the president, who is popularly elected; Su was chosen for the role by President Tsai Ing-wen in 2019 after an earlier term from 2006 to 2007. Both lawmakers are members of the Democratic Progressive Party, a Taiwanese nationalist political party usually regarded as hostile to mainland China.

Although Beijing regards Taiwan as a part of China, the island changed hands multiple times in the nineteenth and twentieth centuries. In 1895, following the ruling Qing Dynasty’s loss to Japan in the First Sino-Japanese War, Taiwan was ceded to Japan as part of the peace settlement. After Japan surrendered in 1945, China, then the Republic of China under Generalissimo Chiang Kai-shek and the Kuomintang Party, retook Taiwan, only to flee to the island four years later following the Kuomintang’s loss to the Communist Party in China’s civil war.

While the communist government in Beijing has never exercised de facto control over Taiwan, it continues to regard it as a rebellious province and has emphasized that it intends to reabsorb it in the near future.

At the Shangri-La Dialogue security summit in Singapore on Sunday, Chinese defense minister Wei Fenghe reiterated that while his government would seek “peaceful reunification” with Taiwan, it would also reserve “other options” to retake control of the island if negotiations failed.