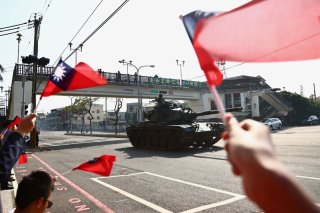 Qin Gang, China’s ambassador to the United States, warned on Friday that the United States and China could enter a military conflict over Taiwan if Washington abandoned its “strategic ambiguity” position in favor of overt support for Taiwanese independence.

The interview, which aired within hours of a meeting between Secretary of State Antony Blinken and Chinese foreign minister Wang Yi over the ongoing confrontation along the Russo-Ukrainian border, did not immediately trigger comments from the State Department.

Tensions between China and Taiwan, long a contentious issue in East Asia, have escalated significantly during the tenure of Chinese president Xi Jinping, who has pledged to extend Beijing’s rule to the island in the near future. U.S. military leaders have warned that China’s increasing military development reflects a desire to recapture the island using force. Mark Milley, Chairman of the Joint Chiefs of Staff, told Congress in 2021 that Beijing intended to have the capability to seize and hold Taiwan within six years. However, Milley noted that an actual invasion was not guaranteed during that period.

Beijing has also sought to leverage its economic clout to constrain the debate over Taiwanese independence, promising that Taiwanese businessmen and officials advocating independence from Beijing would lose access to commerce on the mainland.

Public support for Taiwanese independence has increased in recent years, particularly after China’s crackdown on protests in Hong Kong, another territory officially governed under the “One Country, Two Systems” principle that Beijing has suggested as a model for a Chinese-controlled Taiwan.

However, most polls suggest that a majority of Taiwan’s citizens continue to prefer the uncertain status quo over Taiwanese independence, which, as Qin noted, could trigger regional unrest.