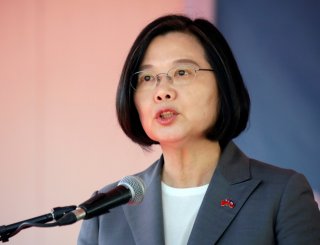 China’s Taiwan Affairs Office announced on Friday that Taiwanese people who advocate for independence will be held in “criminal responsibility” by Beijing, effectively making it a crime within China for Taiwanese to advocate for the island’s independence.

The Taiwan Affairs Office declared that the penalty would “be effective for life.”

Although Beijing has viciously attacked Taiwanese politicians who advocated for the island’s formal independence from China in the past, Friday’s statement was the first time that criminal penalties had been assigned to the act.

China has claimed since 1949 that Taiwan, an island that has formed its own independent, democratic government, is a rebellious province and must return to Beijing’s rule in the future. Following the hundredth anniversary of the founding of the Chinese Communist Party in July, the government of President Xi Jinping has advocated a more militant approach to resolving the dispute, claiming that the island would be reunified in the “near future” using force if necessary. Military escalations in recent weeks have included military exercises on the mainland opposite Taiwan and hundreds of jet fighter flights near, although not into, Taiwan’s airspace.

The Taiwan Affairs Office, established in 1988 to help guide Beijing’s relations with Taipei, explicitly named three Taiwanese politicians—Premier Su Tseng-chang, Speaker of Parliament You Si-kun, and Foreign Minister Joseph Wu—as part of a larger list of undesirable politicians who had “stubbornly” pursued the island’s independence. It announced that the members of the list would not be allowed to enter the mainland or China’s two “special administrative regions,” Hong Kong and Macau. It also specified that any companies they were linked to would not be allowed to do business on the mainland.

This could complicate Taiwanese politics, as many Taiwanese firms have established commercial links with Beijing, meaning that they could pressure their workers to self-censor in the interest of profits—a practice that some Americans and U.S. companies are intimately familiar with.

The Taiwan Affairs Office ominously warned that the Chinese government might take “any other necessary measures” against those advocating for independence, without clarifying what those measures would be.

“Those who forget their ancestors, betray the motherland, and split the country,” a Taiwan Affairs Office spokeswoman warned, “will never end up well, and will be spurned by the people and judged by history.”