‘Pay for Every Inch’: U.S. and Allies Refuse to Give Up on Ukraine 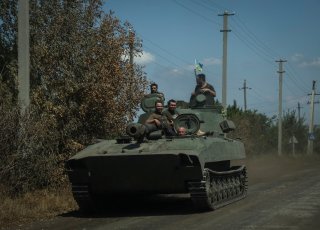 The United States and its allies are preparing for a long-term war in Ukraine, with officials from a group of fifty countries expressing a collective commitment to continue their support for Ukraine. Following the fourth meeting of the Ukraine Defense Contact Group, U.S. defense secretary Lloyd Austin made it clear that support for Ukraine remains strong as the war evolves into a bloody, protracted fight.

Austin explained that the United States and its allies will not only fast-track urgently needed weapons in the short term but will also focus on sustainment and the necessary long-term planning to maintain the effort.

Following Russia’s deliberate shift to the eastern Donbas region in April, fighting has been both intense and protracted, with advances measured in “literally hundreds of meters,” according to Austin. Framing the ongoing fighting as a high-cost “battle of attrition,” Chairman of the Joint Chiefs of Staff Gen. Mark Milley described Russia’s gains as limited and costly.

“So for ninety days, the Russian advances have amounted to maybe six to ten miles, something of that range. It's not very much,” Milley said. “It's very intense, a lot of violence, tens of thousands of artillery rounds every twenty-four-hour period, lots of casualties on both sides, lots of destruction. … But in terms of actual ground gain, very, very little by the Russians, relative to all of Ukraine,” he added. “The Ukrainians are making the Russians pay for every inch of territory that they gain.”

In addition to their slow-moving progress in urban and rural areas of eastern Ukraine, Russian forces are also vulnerable behind their own battle lines, largely due to advanced Ukrainian tactics, countermeasures, and ambushes. Milley noted that “the Russians are challenged not only to their front, with the Ukrainian conventional forces, but they're also challenged in their rear areas. Their rear areas are not secure, for sure, and the Ukrainians have very effective resistance networks set up.”

This may mean that Ukrainian forces continue to employ hit-and-run ambush tactics, which have been used with great effectiveness before, as well as reconnaissance missions or successful long-range rocket strikes. Given how important logistics are for Russia’s effort to make advances, Ukraine would benefit greatly if Russian supply lines were vulnerable or subject to regular attacks.