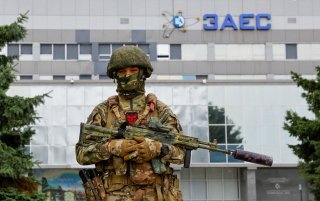 The United Nations has called on Russia and Ukraine to establish a “nuclear safety and protection zone” around the Zaporizhzhia nuclear power plant (NPP).

“We are playing with fire, and something very, very catastrophic could take place,” said Rafael Grossi, head of the International Atomic Energy Agency (IAEA), following the agency’s mission to the Zaporizhzhia NPP. The IAEA issued a report on Tuesday assessing the risks to nuclear facilities in Ukraine as Russia’s invasion enters its seventh month.

“The [IAEA] team closely witnessed shelling in the vicinity of the ZNPP, in particular on 3 September when the team was instructed to evacuate to the ground level of the Administrative Building,” said the report, noting damage to a wide array of structures and systems, including a turbine lubrication oil tank, the roofs of several buildings, and a building housing “fresh nuclear fuel.”

UN Secretary-General Antonio Guterres reiterated a proposal for a “demilitarized perimeter” around the plant. Guterres said this would include “a commitment by Russian forces to withdraw all military personnel and equipment from that perimeter and a commitment by Ukrainian forces not to move into it,” according to the Associated Press.

Ukrainian president Volodymyr Zelenskyy said on Tuesday that Kyiv will study the specifics of the demilitarization proposal, reiterating his position that any such plan should involve the restoration of Ukrainian control over the plant. “I believe that the world not only deserves, but also needs the representatives of the IAEA to force Russia to demilitarize the territory of the [power plant] and return full control to Ukraine,” he said, adding that Russia’s continued presence in the plant puts the world “on the brink of a radiation disaster.”

Russian UN ambassador Vassily Nebenzia dismissed the UN demilitarization plan as “not serious” earlier this week. “The Ukrainians will immediately step in and ruin the whole thing. We’re defending, we’re protecting the station. In fact, it is not militarized. There is no equipment at the station,” he claimed.

The Kremlin, which has accused Ukraine of continuously shelling the plant over the past several months, said it has requested "additional explanations" from the IAEA on parts of its report, according to Reuters. "There is a need for additional explanations because there are a number of issues in the report. I will not list them now, but we have requested clarifications from the IAEA Director General," Russian foreign minister Sergei Lavrov told reporters.