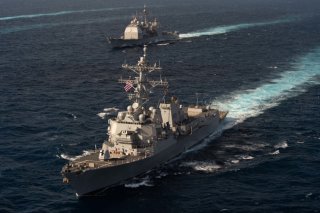 Although the conflict in Ukraine is ongoing, that conflict pales in comparison to the challenge posed to the United States—and indeed, America's allies and friends across the globe—by China.

The Commander of Strategic Command, Vice Adm. Charles A. Richard, explained at Naval Submarine League's 2022 Annual Symposium & Industry Update that the United States is unconcerned and unprepared for that challenge.

"This Ukraine crisis that we're in right now, this is just the warmup," Admiral Richard said in a statement released by the Department of Defense. "The big one is coming. And it isn't going to be very long before we're going to get tested in ways that we haven't been tested a long time."

Eyes across the globe have been drawn to Ukraine since Russia reinvaded the eastern European democracy in late February. Russian president Vladimir Putin has tried to coerce Ukraine and Kyiv's allies to stand down through thinly-veiled threats of nuclear coercion. However, those threats have fallen flat and have not had an effect on the battlefield.

"As I assess our level of deterrence against China, the ship is slowly sinking," he said. "It is sinking slowly, but it is sinking, as fundamentally they are putting capability in the field faster than we are. As those curves keep going, it isn't going to matter how good our [operating plan] is or how good our commanders are, or how good our forces are—we're not going to have enough of them. And that is a very near-term problem."

However, the United States' advantage below the sea, the U.S. Navy's nuclear-powered and nuclear-armed submarines, is unmatched. Yet they are in need of more robust support mechanisms.

"Undersea capabilities is still the one... maybe the only true asymmetric advantage we still have against our opponents," Vice Admiral Richard said.

"But unless we pick up the pace, in terms of getting our maintenance problems fixed, getting new construction going ... if we can't figure that out ... we are not going to put ourselves in a good position to maintain strategic deterrence and national defense."

The Vice Admiral ended his remarks on a positive note, recalling the United States' ability to rapidly achieve success in overcoming intensely challenging obstacles of engineering and willpower.

"We have got to get back into the business of not talking about how we are going to mitigate our assumed eventual failure to get Columbia in on time, and B-21, and LRSO, and flip it to the way we used to ask questions in this nation, which is what's it going to take? Is it money? Is it people? Do you need authorities? What risk? That's how we got to the Moon by 1969. We need to bring some of that back. Otherwise, China is simply going to outcompete us, and Russia isn't going anywhere anytime soon."