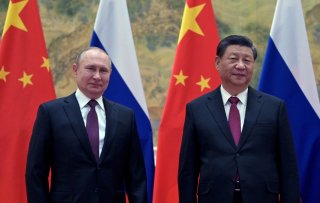 Nikolai Patrushev, the secretary of Russia’s powerful National Security Council, declared during a visit to China on Monday that the Kremlin would seek to expand its security ties to Beijing in the coming years—marking a continued strengthening of the Russian-Chinese partnership amid increasing pressure on both countries from the West.

During a meeting with Guo Shengkun, a leading official in the Chinese Communist Party, Patrushev emphasized that the “strengthening of [the] comprehensive partnership and strategic cooperation with Beijing [is] an unconditional priority of Russia’s foreign policy.”

“In the current conditions, our countries must show even greater readiness for mutual support and development of cooperation,” Patrushev said, likely referring to the extreme Western sanctions imposed on Russia following its invasion of Ukraine in late February. Following the meeting, Patrushev’s office indicated in a statement that he and Guo had agreed to “expand information exchanges on countering extremism and foreign attempts to undermine [the] constitutional order of both countries.”

The meeting between Patrushev and Guo occurred less than a week after Russian president Vladimir Putin met with Chinese president Xi Jinping on the sidelines of the Shanghai Cooperation Organization’s (SCO) annual summit in Samarkand, Uzbekistan. A Chinese statement released after the meeting suggested that the two leaders had given “strong support” for each other’s “core interests.” This likely referred to issues that China considers its internal affairs, including the status of Xinjiang, Hong Kong, and Taiwan, which Beijing claims as a province but operates under its own government. The Chinese statement made no reference to Ukraine, where Russia has suffered a string of calamitous military defeats in recent weeks, and a Russian summary of the meeting made reference to Xi’s “concerns” regarding Russian conduct in Ukraine, without elaborating. The two leaders also reportedly discussed Chinese imports of Russian oil and natural gas, as well as other economic issues.

The meeting between Xi and Putin marked the two leaders’ first face-to-face conversation since they spoke in Beijing during the Winter Olympics in late February. During that meeting, the Russian and Chinese governments proclaimed a “no limits” partnership only days before Russia’s invasion of Ukraine on February 24. The close proximity of the two events has led some Western commentators to allege that Putin’s meeting with Xi served to gain his approval for the invasion, although Chinese officials have denied this.