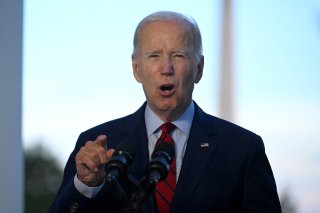 The Biden administration has imposed a new round of sanctions on Russian individuals and companies over Moscow’s war in Ukraine.

The new restrictions, which include visa restrictions on 893 Russian officials described as supporting, directing, or being complicit in the ongoing invasion of Ukraine, were announced on Tuesday by the Department of State. The sanctions package included punitive measures against three more Russian oligarchs—Dmitry Pumpyanskiy, Andrey Melnichenko, and Alexander Ponomarenko—who are accused of acting as “Putin enablers.” The State Department’s statement unveiled sanctions against a slew of individuals and organizations involved in Russia’s occupation of southeastern Ukraine, including Russian-aligned occupation officials in Mariupol and Kherson.

The package additionally imposed sanctions on some two dozen “Russian high-technology entities” believed to be suppliers of microelectronics used in advanced Russian military hardware. The Skolkovo Institute of Science and Technology (SKOLTECH), which the State Department described as having “a close relationship with Russia’s defense sector,” was sanctioned over its contributions to Russian missile, aerospace, surface-to-air missile (SAM), combat vehicle, and electronic warfare technology.

The State Department designations were accompanied by an expansion of the Treasury Department’s Office of Foreign Assets Control (OFAC) sanctions list. The new Treasury Department sanctions included star gymnast Alina Kabaeva, rumored in prior years to be Vladimir Putin’s girlfriend, and technology executive Natalya Popova. They additionally cover billionaire and Putin associate Andrey Grigoryevich Guryev and his son Andrey Andreevich Guryev, as well as billionaire iron and steel magnate Viktor Rashnikov. The sanctions freeze the U.S. property of designated persons and ban U.S. individuals from engaging in transactions with those affected.

The new sanctions hit Joint Stock Company Promising Industrial and Infrastructure Technologies, “a financial institution owned by the Russian Federal Agency for State Property Management,” for facilitating attempts by Russian financial actors to evade sanctions. “With today’s action, OFAC has sent a clear message that those who facilitate U.S. sanctions evasion will themselves be sanctioned,” read the Treasury Department statement.

“As innocent people suffer from Russia’s illegal war of aggression, Putin’s allies have enriched themselves and funded opulent lifestyles,” said Secretary of the Treasury Janet Yellen. “The Treasury Department will use every tool at our disposal to make sure that Russian elites and the Kremlin’s enablers are held accountable for their complicity in a war that has cost countless lives. Together with our allies, the United States will also continue to choke off revenue and equipment underpinning Russia’s unprovoked war in Ukraine,” she continued.