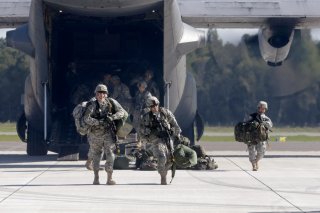 As the Ukraine crisis deepens, NATO is sending additional forces to Eastern Europe.

“NATO Allies are putting forces on standby and sending additional ships and fighter jets to NATO deployments in eastern Europe, reinforcing Allied deterrence and defence as Russia continues its military build-up in and around Ukraine,” read a statement published yesterday by NATO.

“Denmark is sending a frigate to the Baltic Sea and is set to deploy four F-16 fighter jets to Lithuania in support of NATO’s long-standing air-policing mission in the region,” the statement continued. The statement added that Spanish ships will accompany NATO naval forces and France “has expressed its readiness to send troops to Romania under NATO command.” In addition, the Netherlands will send two F-35s to Bulgaria to “support NATO’s air-policing activities in the region” and will also put “ship and land-based units on standby for NATO’s Response Force.”

In a reference to earlier reports that the Biden administration is reviewing options to reinforce NATO’s eastern flank, the statement highlighted that the United States is “considering increasing its military presence in the eastern part of the Alliance.”

NATO Secretary General Jens Stoltenberg added that “NATO will continue to take all necessary measures to protect and defend all Allies, including by reinforcing the eastern part of the Alliance. We will always respond to any deterioration of our security environment, including through strengthening our collective defence.”

A 2016 Rand Corporation report concluded that Russia’s Western Military District (WMD)—one of the country’s five major military formations—is capable of steamrolling NATO forces on the alliance’s eastern flank. The report warned that the WMD could reach the outskirts of Tallinn or Riga—the capitals of Estonia and Latvia, respectively—in under sixty hours. This could present NATO with a disastrous fait accompli in the opening days of a potential conflict.

The Defense Department announced this week that 8,500 U.S. troops have been put on “high alert” for a potential deployment in Eastern Europe. Pentagon spokesman John Kirby added that most of the 8,500 troops would take part in a NATO Response Force that could soon be activated, with the rest being allocated to a specific U.S. response. “It’s very clear the Russians have no intention right now of de-escalating,” Kirby told reporters on Monday. “What this is about, though, is reassurance to our NATO allies.”