Afghanistan’s Panjshir Resistance Fighters Are Back on the Battlefield 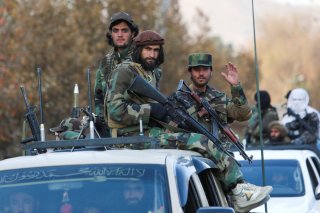 Spokesmen for the National Resistance Front, a group of Afghan soldiers still loyal to the previous government that has waged a guerilla war against the Taliban since the group’s takeover, claimed over the weekend that they had launched an armed offensive and captured three districts in the country’s northern Panjshir province.

The action was the first coordinated offensive against the Taliban since August, according to Ali Nazary, the group’s designated head of foreign relations.

“Since last night when Ahmad Massoud … ordered his forces to launch their offensive, three major districts were liberated in Panjshir,” Nazary said, referring to Ahmad Massoud, the NRF’s overall military commander. “Many Taliban fighters have asked for time to surrender. The enemy has suffered heavy casualties.”

Nazary claimed that in the three districts, the Afghan resistance movement had captured the district’s main road, as well as the surrounding villages and other outposts. He claimed that Massoud’s impact would continue across twelve provinces, including many outside Panjshir.

The Taliban was quick to dismiss reports that its fighters had been expelled from districts in Panjshir. Zabihullah Mujahid, the group’s lead spokesman, claimed that the “allegations” made by “some insurgents in the media … are untrue.”

Mujahid insisted that no “military incident” had taken place in Panjshir, although camera footage taken by the rebels that later circulated on social media appeared to show skirmishes between its fighters and Taliban militants in the province. Other Taliban sources acknowledged that there had been a clash but insisted that the group had emerged victorious. Later videos showed a caravan of Taliban fighters—presumably reinforcements—traveling toward the fight via Panjshir’s main road.

The Panjshir Valley is notorious for its resistance to outside control. During the 1980s, Afghan mujahideen under Ahmad Shah Massoud, Massoud’s father, repelled repeated Soviet incursions into the valley during Moscow’s ten-year war in Afghanistan. Following the Soviet withdrawal and the collapse of Afghanistan’s communist government, Massoud remained alive during the factional struggle that followed and successfully defended the valley from the Taliban until 2001. On September 9 of that year, two days before the September 11 attacks, Massoud was assassinated by two Al-Qaeda members posing as journalists. Two decades after his death, he remains extremely respected in Afghanistan, with many Afghans calling him the “Lion of Panjshir.”