The Air Force Plans to Improve Its Premier Spy Drone 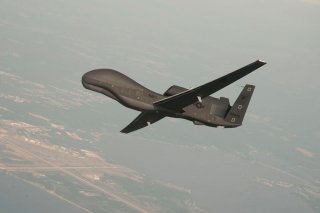 If a high-altitude drone can zoom in to gather ultra-high-resolution images across unparalleled distances, network and process new incoming time-sensitive information at great distances beyond or outside of the target reach of advanced enemy air defenses, ground fire or even air-to-air attacks. It might provide unprecedented added value in a massive, high-threat all-out warfare environment and not have its operational use restricted to so-called “permissive” environments. It might generate a unique and much desired operational impact, without necessarily needing to be stealthy.

This kind of thinking aligns with what could be called an interesting two-fold Air Force plan for its RQ-4 Global Hawk drone. There appears to be a dual-trajectory for the platform to include retiring as many as twenty-four Global Hawks while massively upgrading its newest Block 40 variant. Block 20 and Block 30 Global Hawks are being retired, as they are less advanced than the most modern variant, the Block 40. For example, while Block 30, according to Air Force information, operates with electro-optical-infrared cameras and synthetic aperture radar (SAR), its capacity does fall short of Block 40. Block 40 Global Hawks, which became operational within the past five to six years, are also engineered with a radar technology insertion program, active electronically scanned array, SAR and moving target indicator, an advanced sensor that detects and then tracks movement on the ground below.

Block 30 Global Hawks were used in Operation Iraqi Freedom, and often referred to by Air Force Gen. Richard Myers, who was chairman of the joint chiefs of staff at that time, as instrumental to Pentagon efforts to pioneer a “fusion” process of sharing information with other key platforms. This operational functionality, used with success in Iraq, could easily be seen as a precursor or even part of the developmental foundation for multi-domain, cross-platform data networking breaking through today.

Therefore, Global Hawk upgrades pertain to the needed command and control infrastructure essential to bringing the Pentagon’s Joint All Domain Command and Control effort to fruition, a cutting edge and fast-progressing effort to enable an air-ground-sea-undersea “meshed” networking of interconnected nodes able to transmit organized and time-sensitive data across the force in real time. The entire concept, which Global Hawk has been involved with over the years, involves thinking of platforms such as drones and even fighter jets, ships or ground vehicles, not so much as isolated systems connecting point-to-point but rather breaking through to a multi-service, multi-domain-force-wide secure information network.

The Global Hawk circles above hostile terrain searching for enemy targets for up to forty-hours on a single mission, zooming in high fidelity, long-range sensors able to monitor the training, force positioning and weapons activities of potential adversaries. Perhaps of greatest significance, the RQ-4 Global Hawk finds and transmits time-sensitive crucial targeting details, a long-standing technical capability perhaps at least in part explaining why the Air Force is putting more money into upgrading and sustaining its current fleet. These kinds of upgrades might be a key way the Air Force is looking to the future with Global Hawk through enhancements while retiring older variants. This could free up efforts to further innovate and complete the ongoing transformation of the Global Hawk into a combat platform well-suited for high-threat, major warfare against a technologically advanced adversary.