Alexandria Ocasio-Cortez and Ilhan Omar Have a Wild Coronavirus Plan 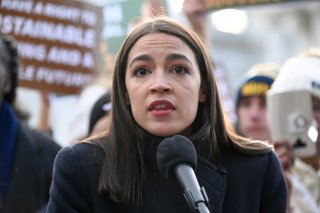 Last evening, The Hill premiered two videos, both about a minute in length, of freshmen congresswomen Alexandria Ocasio-Cortez of New York and Ilhan Omar of Minnesota that shows the two members calling for the nationalization of the American economy in the face of the coronavirus pandemic and subsequent economic crash. Both Ocasio-Cortez and Omar are self-described democratic socialists and makeup half of “the squad,” a group of four, like-minded, progressive female Democrats. It is unknown when the videos were recorded.

“For some reason, we have an enormous problem with enacting the Defense Production Act for saving lives and guaranteeing healthcare,” said Ocasio-Cortez. Passed in 1950, the Defense Production Act allows the president of the United States to begin the implementation of central planning over the American economy, obligating private businesses to prioritize production needs set by the federal government. Donald Trump, who invoked his authority under the act in late March, has been hesitant to use the power broadly.

“Now that [hesitance] I think points to a much deeper problem with the systemic priorities that we currently have in the United States,” continued Ocasio-Cortez, who has become the youthful powerhouse of progressive politics. “But it’s never too late to change it. We must organize to change those priorities, from our budget to our production, we have to start demanding and organizing from the bottom-up.”

The congresswoman called for a proletariat mass movement, made up of nurses, warehouse workers, grocery store employees, and politicians, to demand “that we strip profit motive out of our decisions and reprioritize public good and the health of everyday people.” This workers revolution, implemented through mass democracy, has been the long-cherished goal of democratic socialists.

Ilhan Omar, who has engendered her own separate controversies, believes crisis management cannot be left to the states. “States themselves are being put at disadvantage when we have the federal government bidding against them,” she said, seeking a national solution.

Omar elaborated on her rejection of capitalism and the system of private property ownership, since in her mind the decisions of private capital too often dissent from the demands of the state. “Corporations may not want to produce necessary items because it’s not profitable for them. That’s already understood right now by many of the public, and we’re hearing so many people raise their voices every single day,” she said. “And we’re actually addressing this systematic problem that we have where we create a hierarchy and profits are always placed above people.”

The answer to the public health and economic crisis, she believes, is for the federal government to use laws like the Defense Production act to seize the means of production. “As a federal government we have the proper tools to deploy, and it’s deplorable really, and unconscionable, that every single tool that we have is not being deployed right now,” she expressed. “And it’s shameful that we continue to put lives at risk, and so it is important for us to nationalize the supply chain. It’s important for us to take action in nationalizing our healthcare system.”

Ocasio-Cortez and Omar’s predecessor in the Democratic Party, President Harry Truman, attempted a similar program in 1952 when he ordered the nationalization of America’s steel mills. That action was reversed in a 6-3 decision by the Supreme Court.