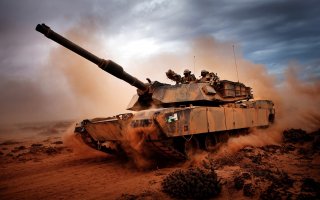 Army robots will carry ammunition, traverse rigorous terrain, conduct high-risk forward-operating reconnaissance missions and possibly even fire weapons when directed by a human operator. Most of all, unmanned systems of all sizes will be increasingly networked, capable of ever-advancing levels of autonomy and equipped with high-speed, artificial intelligence-enabled data processing technology.

The Army’s ambitious, yet fast-moving program to engineer and deploy a new fleet of Light, Medium, and Heavy Robotic Vehicle has now taken several large steps forward with the arrival of eight new prototype vehicles. The robots, in the Medium-class, will go through extensive testing with Army soldiers to better ascertain the merits and limitations of their attributes and limitations with a specific mind to how they will impact maneuver formations in a future war.

The thinking is clear on this last question; yes indeed robotic vehicles, and manned-unmanned teaming in particular, are expected to massively transform modern warfare in a host of defining aspects. Not only will they increase standoff ranges for attacking ground forces, but they will enable a more dispersed, yet highly networked combat system of interconnected or “meshed” nodes consisting of long-range fires, radar and surveillance assets, heavy manned vehicles with soldiers performing command and control and air platforms such as attack helicopters or even Air Force fixed-wing stealth fighter jets.

A statement from Army Futures Command’s Next-Generation Combat Vehicle Cross-Functional Team explained that the new robots are “payload agnostic,” meaning they could be equipped with electronic warfare systems, smoke obscuration modules, and a growing range of sensors to include electro-optical/infrared cameras, infrared targeting, and chemical, biological, radiological and nuclear detection kits.

“The prototypes will be used by Soldiers in operational experiments to develop the tactics, techniques and procedures that our Brigade Combat Teams will utilize to bring new levels of lethality to our forces through the combining of Manned and Unmanned Teams,” Maj. Gen. Ross Coffman, the director of the Next Generation Combat Vehicles Cross-Functional Team, said, according to Defense Brief.

What might some of these tactics, techniques, and procedures be? Certainly, autonomous drones enable a much more dispersed battlefield, therefore expanding the operational envelope for combined arms maneuver. The largest impact of these robotic-combat vehicles may simply be the variety of ways in which they can streamline operations, connect otherwise dispersed air-ground-sea-space nodes to massively reduce sensor-to-shooter timelines to expedite targeting and efforts to “close with” an enemy in war. Artificial intelligence (AI) is fundamental to all of this, given the vastly increasing volume of incoming sensor data, often from otherwise disparate sources or data pools, needs to be organized, analyzed, and quickly transmitted. This is where advanced, AI-empowered algorithms come in, something the Army has already demonstrated with success at its breakthrough Project Convergence event wherein sensor-to-shooter timing and pairing was reduced from twenty minutes to a matter of seconds. Incoming data can be gathered, aggregated, and then bounced off of an AI-empowered database to quickly make comparisons, assess new information in relation to established information or past contingencies, perform analysis and make recommendations to human commanders regarding what an optimal approach might be. This enabled speed, and the near-simultaneous organization and categorization of multiple variables in relation to one another.