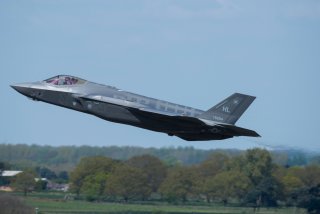 Delivery timelines and milestones are still in flux, but the Air Force will likely accelerate the development of the new, cutting-edge aircraft, a flight demonstrator of which has already taken to the skies.

Described as a “family of systems,” the NGAD will consist of a manned stealth fighter platform and a small number of multi-mission drones called Collaborative Combat Aircraft (CCA), which will test enemy air defenses, blanket high-risk areas with forward surveillance, and deliver weapons, with humans in a manned aircraft performing command and control.

Air Force Acquisition Executive Andrew Hunter said in an interview that the manned NGAD platform itself will likely be developed by the end of the decade, while the CCAs will emerge before then. The defense industry is already significantly invested in research and development for the CCA program, with various firms preparing for a competition to build the new family of drones.

The ability of manned fighter aircraft to control the flight path and sensor payload of multiple drones is fast–emerging, if not already here. The concept behind the effort is to develop a paradigm-changing stealth fighter with unprecedented speed, stealth, maneuverability, and lethality, and then to extend the fighter’s combat functionality by allowing the pilot to control multiple drones.

Hunter explained that the NGAD program will adapt and evolve in the coming years depending on requirements, technological developments, and changing threats.

“Will there be manned platforms in two variants? We definitely want to think that through. The first task is to deliver a manned platform. We will evaluate along the way as there is an incremental approach to the possibility of variants,” Hunter said.

On the question of variants, one possibility being discussed is a larger, longer-range variant for the Pacific, which will need to travel great distances across the ocean without refueling while also operating with the speed, stealth, and agility necessary to prevail in a potential great power engagement. While the Pacific is a vast and seemingly limitless expanse of ocean and islands, the European continent is much smaller and easily reachable. Moreover, the large amount of land in Europe means that aircraft can easily stop and refuel or be refueled in flight over permissive allied territory. These tactical realities result in slightly different operational requirements necessary for sixth-generation aircraft to operate in Europe and the Pacific, leading to the possibility of two variants. Given that the NGAD program is being described as a “family of systems,” it would make sense to build different variants for each theater.