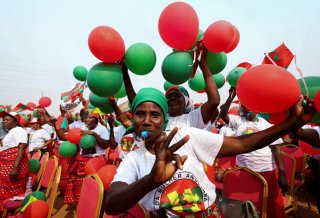 Angola’s National Electoral Commission announced on Thursday that the dominant “People’s Movement for the Liberation of Angola,” or MPLA, was almost certain to secure victory in the country’s most recent general election—fending off a surprisingly powerful challenge from its longtime opponent, the “National Union for the Total Independence of Angola,” or UNITA.

The commission claimed that the MPLA led the field with 51.7 percent of the vote, UNITA received 44.5 percent of the vote, and six other minor parties had split the remainder. It indicated that 97 percent of the votes had been counted, likely making the MPLA’s lead insurmountable. However, UNITA officials disputed the commission’s official results, claiming that the party’s internal tally had shown that it was in the lead and calling for an investigation. The election commission indicated that the contest had been fairly run and denied allegations of fraud. Independent monitors photographed results sheets at many polling stations to ensure that the final count was accurate.

The election between the two historic rivals and former enemies was widely regarded as the most tightly contested since the end of Angola’s civil war in 2002. Although the MPLA has dominated Angolan politics since the country’s independence from Portugal in 1975—functioning as a de facto one-party state from 1975 to 2002, while UNITA fought against the group as a rural insurgency movement—it has struggled to connect with young voters. Although Angola is the second-largest oil producer in Africa behind Nigeria and oil wealth has led to a massive economic boom in Luanda, the country’s capital and by most accounts the most expensive city in the world, more than half of Angolans remain below the poverty line, with limited access to basic needs such as clean water. UNITA’s candidate, Adalberto Costa Júnior, has centered his campaign around economic issues, promising to combat poverty and unemployment once in office. These pledges have led to a groundswell of support from Angola’s youth, who made up roughly three-fifths of voters in the current election.

Angola has been led by incumbent president Joao Lourenco, a former general, since 2017. Although Lourenco has achieved measured success in combating corruption and incentivizing foreign investment, his popularity fell during the Covid-19 pandemic, when Angolan oil revenues fell sharply and other sectors of the country’s economy were shut down. Independent polling before the election suggested that Lourenco and Júnior had roughly the same level of support among registered voters.