In Ankara's Shadow: Why Turkey Is Syria’s Biggest Threat 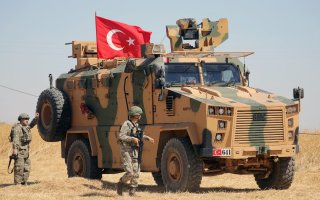 It’s a crisis waiting on the border and threatening to pounce. Hundreds of thousands of lives and seven years of hard-won progress in the fight against ISIS terror could all be thrown into a catastrophe if it goes the wrong way. This is the threat of a new Turkish invasion into northern Syria—a relatively stable region of Syria allied with the United States and struggling to get back onto its feet after years of turmoil.

The world was stunned when Turkey temporarily halted the expansion of NATO by blocking the memberships of Sweden and Finland. Turkey’s demands that these countries extradite Kurdish dissidents were at the center of the NATO meetings in Madrid. Turkey has also declined to implement any sanctions on Russia, as most of Europe has done.

Turkish president Erdogan issued new threats toward another ally of the United States and NATO. He is threatening to attack the Autonomous Administration of North and East Syria (known as the AANES) and where the Syrian Democratic Forces are fighting in the counter-ISIS coalition alongside U.S. and European forces. This region is my home, where I served as a women's rights activist and Kurdish political figure until the conflict forced me to flee. Erdogan has announced plans for another large-scale military incursion into our region, claiming it is a terrorist threat to his country. But his claims are false. This is a peaceful region of Syria that has historically been the home for Syrian Kurds, as well as diverse communities of Arabs, Syriac Christians, Yezidis, Armenians, and others. It’s where the dust has barely settled from the black tides of ISIS, where Bashar al-Assad’s authoritarian government experimented in the persecution of minority ethnic groups, and where a repressed social movement gave way to an inspiring local democratic governance project after the Syrian uprising shook loose the barriers to organizing over a decade ago.

Today, the autonomous region is also where roughly 900 U.S. troops are stationed, alongside their allies, still engaged in routing out ISIS sleeper cells as well as training and equipping Kurdish forces to fight ISIS and manage detainees. ISIS lurks just under the surface. All it needs to reemerge in northern Syria is for Turkey to attack, throwing off the tenuous balance we have worked hard for. Turkey certainly knows that ISIS remains a threat to us all and that should give it pause. The region was recently exempted from U.S. sanctions on Syria by the Treasury Department, opening the way for the U.S. business community to invest there to strengthen its capacity and provide technical assistance. The Treasury Department’s new exemption can also help us to rebuild our communities so that, among other things, young people have opportunities to pursue legitimate employment and not join terror organizations. To permanently defeat ISIS, we need stability.

That’s why, at a recent Senate Foreign Relations Committee hearing on Syria, half a dozen senators and senior officials in the Biden administration—Assistant Secretary of State Amb. Barbara Leaf as well as Deputy Assistant Secretary of Defense (DASD) Dana Stroul—expressed real concern with and clear opposition to an unprovoked Turkish invasion of Syria. Ambassador Leaf was adamant in her concern about Turkey’s statements against northern Syria. DASD Stroul added that the administration made its position very clear to Turkey. “Large-scale incursions will undermine U.S. objectives,” said Stroul. “We have communicated our concerns to Turkey across the Administration.”

Turkey must not be allowed to imperil important U.S. alliances and occupy Syrian territory by using the attention on the Russo-Ukrainian War to grab our fertile land in Syria, terrorize innocent civilians, and kill U.S.-allied forces.

Sinam Mohamad is the representative of the Syrian Democratic Council (SDC) to the United States. For more about the SDC-US Mission, here: https://www.syriandemocraticcouncil.us/.