Antarctic Ice Sheets Could Be Doomed With Accelerated Melting 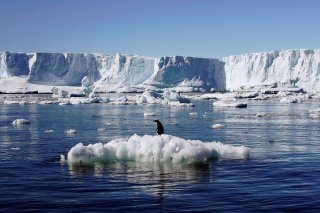 Ice shelves surrounding the Antarctic coastline retreated at speeds of up to 50 meters (164 feet) per day at the end of the last Ice Age—nearly 10 times faster than the satellite-observed melting rates of today.

The study, which was published in the journal Science and led by the Scott Polar Research Institute at the University of Cambridge, utilized patterns of delicate wave-like ridges on the Antarctic seafloor to gauge how fast the ice retreated some 12,000 years ago. During this time, 6.2 miles of ice was lost each year, the researchers estimated.

The study’s researchers warned that with current trends in climate change, the planet could witness similar intensity of devastating effects of retreating ice and the eventual rising of global sea levels.

“We now know that the ice is capable of retreating at speeds far higher than what we see today,” the study’s lead author Julian Dowdeswell, director of the Scott Polar Research Institute, said in a release.

“Should climate change continue to weaken the ice shelves in the coming decades, we could see similar rates of retreat, with profound implications for global sea level rise.”

This particular study was carried out as part of the Weddell Sea Expedition, which set out last year to find Sir Ernest Shackleton’s doomed ship Endurance. Although the sea ice conditions prevented the team from getting images of the ship, the scientists were able to map the seafloor nearby the Larsen Ice Shelf, located east of the Antarctic Peninsula.

“By examining the past footprint of the ice sheet and looking at sets of ridges on the seafloor, we were able to obtain new evidence on maximum past ice retreat rates, which are very much faster than those observed in even the most sensitive parts of Antarctica today,” Dowdeswell said.

A recent study by NASA showed that the ice sheets of Antarctica and Greenland shed 118 gigatons and 200 gigatons of ice, respectively, on average annually. Such melting driven by warmer summer temperatures caused the sea level to rise by about half an inch between 2003 and 2019.

For comparison, one gigaton of ice can fill 400,000 Olympic-size swimming pools.