Apple and Amazon Are Favorites for NFL Sunday Ticket Deals 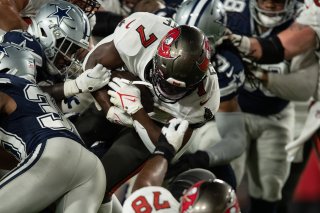 It’s been known for over a year that the NFL is looking for a new partner for its NFL Sunday Ticket package when it becomes available in 2023. Furthermore, DirecTV is not likely to remain the exclusive home of the out-of-market package for long.

At various times, several different companies—including tech giants like Amazon and longtime league broadcast partners like Disney/ESPN/ABC—have been named as front-runners for the package. It also remains a possibility that DirecTV could retain the satellite portion of the package. What remains unclear is the NFL’s timetable for a decision on who gets the package.

However, a new report indicates that the NFL will likely go the tech route.

According to Sports Business Journal, “several sources” characterize Apple and Amazon as the frontrunners to take over Sunday Ticket. Disney/ABC is not completely out of the running, but it is bidding less than the other companies are, per the report. In the event of a Disney win, the package would end up on ESPN+, the report added. Disney CEO Bob Chapek said on a recent earnings call that Disney is in fact in the running for the Sunday Ticket package.

“The NFL … I don’t think they were interested in an exclusive relationship beyond the terms of our underlying deal,” DirecTV’s chief content officer, Rob Thun, said in a recent interview with CNET.

The league has also been eyeing a sale of a stake in its digital arm, which includes NFL Network, and the NFL may make such a deal at the same time as the Sunday Ticket rights.

The league announced new TV deals last year that re-upped its relationships with Fox, CBS, NBC, and ESPN, while also making Amazon the first company to stream regular-season NFL games exclusively. Since then, the different broadcast partners have engaged in a high-profile competition related to different announcers, with longtime Fox announcer Troy Aikman reportedly jumping to ESPN and Al Michaels said to be considering a jump from NBC to one of its competitors, possibly even the new Amazon Thursday package.

Meanwhile, Apple has listed a job for a “senior editorial manager of live sports,” Sports Business Journal said. While Amazon is already in business with the NFL as the new home of Thursday Night Football, Apple is not.