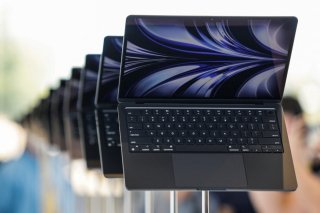 Apple also announced that the M2 chip will also come to the MacBook Pro. The MacBook Air and MacBook Pro, Apple said, are the two best-selling laptops in the world.

“We’re so excited to bring our new M2 chip to the world’s two most popular laptops—the MacBook Air and 13-inch MacBook Pro,” said Greg Joswiak, Apple’s senior vice president of Worldwide Marketing. “Completely redesigned around M2, MacBook Air is thinner, lighter, and faster with a bigger display, better camera, and all-day battery life, in four beautiful finishes. Only with Apple silicon can you build such a thin and light notebook with a fanless design, and this combination of performance and capabilities.”

Also in the keynote, Apple unveiled new editions of its operating systems: iOS 16, WatchOS 9, iPad OS 16, and MacOS Ventura, all of which will arrive this fall.

The headline change in iOS 16 is an updated Lock Screen, which allows for greater personalization, including the ability to change the font of the clock, and add widgets. Notifications are also getting a change in order to not take up the entire screen.

“iOS 16 is a big release with updates that will change the way you experience iPhone,” Craig Federighi, Apple’s senior vice president of Software Engineering, said in the release. “We have reimagined how the Lock Screen looks and works with exciting new features that make it more personal and helpful, introduced iCloud Shared Photo Library for families, streamlined communication through new capabilities in Messages and Mail, and harnessed enhanced intelligence with updates to Live Text and Visual Look Up.”

Despite rumors leading up to the event, Apple did not announce a deal to become the new home of the NFL Sunday Ticket football package.

Apple is believed to be among the bidders for the NFL’s out-of-market package, which has been exclusive to DirecTV since it launched in 1994. The league is known to want to give the package to a streaming partner, and Apple, Amazon, NBC Universal, and Disney/ESPN are the known bidders.

The league has time since the DirecTV Sunday Ticket deal does not expire until after the 2022 season. In its first-ever sports rights deal, Apple recently announced a deal with Major League Baseball to show two Friday games a week.