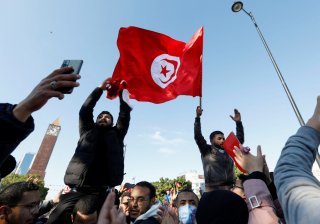 December 17 marked the eleventh anniversary of the self-immolation of Tunisian fruit vendor Mohamed Bouazizi, a spark that lit the earth-shattering Arab Spring pro-democracy movement across the Middle East. On Friday, Tunisian demonstrators took to the streets again, both for and against the changes brought about in the country’s political system at the hands of President Kais Saied.

In July, Saied overthrew the country’s parliament, declaring it dissolved and firing Prime Minister Hichem Mechichi. The dissolved parliament attempted to maintain its position and portray Saied’s actions as illegal, but the Tunisian military supported him, effectively ending the political dispute and giving Saied control. On Monday, he outlined future steps in the country’s political process, announcing that the parliament would remain suspended until December 2022, when new elections would take place. Before those elections, he indicated that a new constitution would be drawn up through consultation with the public and a referendum over the summer.

Although these changes have been supported by many Tunisians, who view the country’s previous parliamentary system as corrupt and inefficient, Saied’s actions have been harshly criticized in some corners, and Western observers have likened them to a coup d’etat. The strongest voices opposing Saied have come from Ennahda, the moderate Tunisian branch of the Muslim Brotherhood, which held the largest number of seats in the country’s parliament prior to its dissolution. A number of former MPs, stripped of their legal immunity since the dissolution of parliament, have since been prosecuted by Saied’s government on corruption charges.

Consequently, roughly a thousand protesters gathered in a central square in Tunis on Friday, chanting slogans that described the July events as a coup d’etat and pushing for a restoration of democracy. Nearby, a smaller gathering of Saied supporters chanted in favor of prosecuting corrupt government officials. Tunisian riot police observed both groups without intervening.

Bouazizi, who lit himself on fire in the rural city of Sidi Bouzid after local officials stole from him and the city's governor refused to see him, became emblematic of Tunisians’ and Arabs’ frustration with corrupt governments and disregard for the rule of law. The massive protests that followed forced President Zine el-Abidine Ben Ali, who had held power since 1987, into exile. The protest movement then spread into Egypt, and from there across the Arab world, with major geopolitical consequences.

In the past, Saied, a constitutional law professor prior to entering public life, has embraced the goals of Tunisia’s 2010-2011 revolution but argued that it was co-opted by corrupt politicians and had to be restored through his proposed constitutional changes. So far, polls suggest that most Tunisians support him, though largely out of frustration over the country’s economic stagnation at the hands of the parliament during the past decade.