Is Armenia Finally Turning Against Russia? 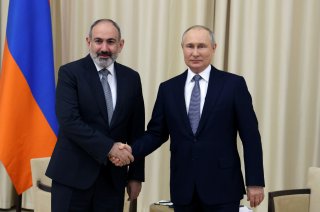 Last week, Armenian prime minister Nikol Pashinyan delivered a snub to Russian president Vladimir Putin. Hosting the Russian leader in the Armenian capital of Yerevan for a gathering of the Russian-led Collective Security Treaty Organisation (CSTO), Pashinyan refused to agree to a summit declaration. Though any distancing from Putin should be welcomed, why was Armenia hosting Russia’s biggest military conference in the first place?

The CSTO is a mirror of NATO. Like the Western alliance, an attack on one is considered an attack on all six members—Armenia, Belarus, Kazakhstan, Kyrgyzstan, Russia, and Tajikistan. But with decision-making situated in Moscow, it operates as an intergovernmental vehicle for Russian power projection. When anti-government protests threatened Russian interests in Kazakhstan at the start of the year, thousands of troops from across the alliance were sent to quash the dissent. But when Armenia invoked the collective defense provision during this fall’s violence at its border with Azerbaijan, the alliance was silent.

Tied up in Ukraine, Russia could spare little bandwidth for issues in what it considers its own backyard. But this episode raised questions as to why Armenia didn’t pull out of the conference—or the organization altogether. With the alliance having not fulfilled its core obligation, Armenia had seemingly little to gain by hosting the Russian pariah, especially given its persistent attempts to curry favor with the West. Even CSTO member Tajikistan abruptly canceled training drills on its territory in October.

Some argue Armenia has no choice—it is too small to resist Russia’s orbit, even after Moscow’s senseless war in Ukraine. Armenia may be only ostensibly dependent on Moscow for its security, but it certainly is dependent economically. Russia supplies 85 percent of Armenia’s natural gas and 99 percent of its wheat. But this argument ignores that small countries often do take principled stances, even when they are economically harmful.

Three decades after Lithuania broke its own dependence on Russia, one of Europe’s smallest economies is now standing up to the world’s second-largest. Lithuania has publicly called China’s treatment of its Uyghur minority a genocide, withdrawn from the so-called 17+1 group that China uses for meetings with Central and Eastern European states, and opened a Taiwanese Representative Office, making it the first European nation to do so. A heavy hand of economic coercion swiftly followed: China banned imports from Lithuania, as well as the import of any product that uses Lithuanian parts. Even after this economic coercion, Lithuania still stood on its principles.

Others argue that Armenia is not a case of being a small country, but a case of living in an unfriendly neighborhood. The country is economically isolated in its region; Azerbaijan and Turkey have had their borders closed to Armenia for nearly three decades, cutting off over 80 percent of Armenia’s perimeter.

But as with the small nation excuse, this argument mistakes having no choice with having difficult choices that involve trade-offs. Armenia’s borders were closed because of its occupation of Azerbaijan’s Karabakh region after a ceasefire was called in 1994 (Turkey closed its own border with Armenia in solidarity with its ally). But Armenia did not genuinely seek a peace deal that would have led to the renormalization of relations in its neighborhood—and away from dependence on Russia. Doing so would have required moving against the nationalist fervor that finds sustenance from the Karabakh cause and pursuing a pragmatic policy that would have benefited their citizens in the long run.

It is Armenia’s “cakeism” that is to blame for its obsequiousness on Russia, not its unfriendly neighborhood or size. Yet playing it both ways doesn’t work post-Ukraine. As a member of the Eurasian Economic Union (EAEU) with Russia, Armenia has stood to benefit from European Union sanctions on Moscow. In October, eyebrows were raised when data revealed that imports of refrigerators, washing machines, and breast pumps to Armenia had exponentially spiked. There were well-founded fears the real recipient was Russia's sanctioned arms industry, which is cannibalizing appliance electronics to acquire key technologies. Even before, many saw Armenia as a “sanction-skirter” for Russia when its exports to Russia jumped 50 percent this year. A lack of clear data suggested Armenia was re-exporting Western products for a transit fee.

This wait-and-play-both-sides approach is out of kilter with the world’s big-picture politics since the invasion of Ukraine. The recent CSTO snub cannot be seen as a brave stance when Armenia profiteers from Russia’s sanction busting. Such a stunt may serve only to show Putin that Armenia’s allegiance cannot be taken for granted, while Armenia remains in the security alliance.

If Armenia actually wants to align with the West, there is a simple way to demonstrate its interest: leaving the CSTO.

Retired Colonel Wes Martin has served in law enforcement positions around the world and holds an MBA in International Politics and Business.