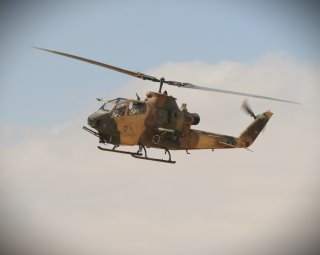 The Army’s fast-emerging Future Long Range Assault Aircraft (FLRAA) is expected to have double the range and speed of legacy helicopters like the Black Hawk and introduce paradigm-changing weapons. A lesser known, yet equally key, element of the Army program pertains to computing, sensing, and information processing.

The concept is to not only expand the reach and efficacy of missions by massing power and reaching time-sensitive objectives much faster, but also to support huge leaps forward in networking, information sharing, and data analysis. This would permit the Army to find and destroy targets much faster.

Processing targeting specifics while traveling at longer ranges and faster speeds help accomplish what one senior Army weapons developer explained as speeding up the well-known Observation, Orientation, Decision, Action (OODA) Loop concept. The idea has widespread implications across the services. A new generation of long-range, high-fidelity sensing and onboard data processing can help pilot crews make critical wartime decisions at the speed of relevance, ahead of or inside of an enemy's decision cycle.

“When it comes to the maneuver force, it’s really important to be there before your enemy. You know, there’s technology that can help with that ... speed matters. Being inside, you know, to use an old term, the OODA Loop is big. You have to get inside your enemy’s decision cycle. And one of the things that Army Aviation does for the land component is it helps the maneuver force get there and do that. I think whether it’s sensing, whether it’s reconnaissance missions, or whether it’s air assault missions, you know, it’s the speed at which we do these ranges,” Lt. Gen. Thomas Todd, chief innovation officer at Army Futures Command, told the National Interest in an interview.

Todd explained that in this respect, the FLRAA will operate as a critical battlefield “node” among a group of sensors and multi-domain combat platforms. Part of how this will be accomplished will be through the use of artificial intelligence and advanced computer algorithms able to gather, organize, and analyze large pools of otherwise disparate sensor information.

“It will add speed and range that we've never had before and other things like augmented reality, AI, and autonomy, all of those will be spinning out individual technologies rapidly. It's all because of the experimentation that we've conducted about Project convergence and other operational experiments throughout the year,” Todd said. “I think the beauty of where the Army is going in the future fight is dedicated to getting after air reconnaissance. That’s where it needs to be and certainly moving in our maneuver force where it needs to move in a timely fashion so that it creates an advantage for our force and a disadvantage for adversaries.”

The Army's FLRAA competition is now coming down to the wire; the service is expected to announce the results of its deep analysis of two competing industry offerings, a tiltrotor aircraft from Bell and a high-speed Lockheed Martin-Sikorsky utility helicopter, soon.