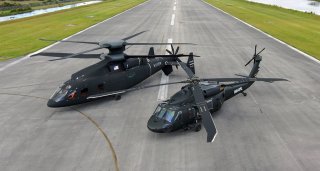 The U.S. Army is currently evaluating several industry offerings for its new Future Long-Range Assault Aircraft (FLRAA), a program intended to replace the UH-60 Black Hawk helicopter. The FLRAA, a brand new aircraft that Army strategists foresee speeding through the air faster than 300 knots to rescue injured soldiers on the brink of death and flying low to the ground across uneven terrain to avoid enemy detection and to deliver soldiers into dangerous, “hot” landing zones, is set to support the Army’s Future Vertical Lift (FVL) program into the 2050s and beyond.

In fact, while the FLRAA program is intended to develop a successor aircraft to the Black Hawk, it will also fly alongside, complement, and greatly expand the Army’s existing vertical lift capabilities. The Army is currently working with two competing vendors, Bell Helicopter and Lockheed-Sikorsky, in a developmental phase for the FLRAA aircraft wherein designers and builders are currently submitting their formal configuration proposals. The products produced by both companies are being closely examined by the Army as possible options for a new generation of attack and utility helicopters. Their designs are quite different.

The Army concept with FLRAA is to build upon the Black Hawk’s success and combat performance, while capitalizing on various innovations and a new generation of technology in the process. This is quite significant, as the latest U.S. Army Black Hawk M helicopter is engineered with an upgraded, high-powered, and fuel-efficient engine; composite rotor blades; and vastly enhanced digital cockpit displays and targeting systems. In recent years, the Black Hawk helicopter has successfully expanded its mission scope to include medical evacuation; air assault; troop, cargo and ammo delivery; and close air support to advancing ground forces and large-scale infantry attacks.

The Lockheed-Sikorsky DEFIANT X FLRAA offering seeks to achieve breakthrough speed, range, and maneuverability through a series of helicopter innovations, including more power and efficient torque management and distribution. To achieve this, the DEFIANT X is built with coaxial counter-rotating rotor blades and a smoother, less jagged, and, therefore, stealthier configuration with fewer protruding external structures likely to generate a return radar signal. The DEFIANT X can load up with litters for medical evacuation missions, missiles, and guns to roll out of a stealthy internal weapons bay or transport large numbers of armed infantry for a coordinated assault, developers say.

Bell’s V-280 Valor, meanwhile, offers a next-generation Tiltrotor design that has demonstrated an ability to hit breakthrough speeds of more than 300 knots. Bell’s “clean sheet” tiltrotor design seeks to combine airplane speeds with helicopter-like agility and “hover” ability. The V-280’s engineering has been focused on developing an innovative, new tiltrotor aircraft able to provide improved speed and range while also sustaining the agility and multi-mission functionality of a helicopter. The V-280’s speed and agility are themselves breakthrough developments, yet they are also “safety” enhancing characteristics. The plan is to build something that will not only be dominant in 2030 but also be upgradeable such that it can remain dominant with ongoing modernization efforts and upgrades as technology becomes available.