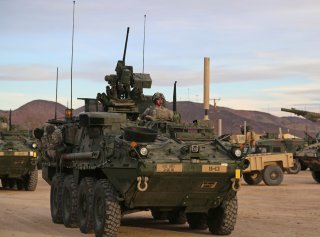 The U.S. Army is now firing Javelin anti-tank missiles from seven-ton robots capable of surveilling high-threat areas, finding and tracking enemies, and taking out targets when directed by a human.

“We just finished our second large-scale operational soldier evaluation done at Fort Hood, Texas. We had twelve robotic platforms with six control vehicles. It's a culmination of about four years of activity. This really, really is a huge learning opportunity for the Army to understand how combat robotics can inform future decisions on how we buy material and how we fight,” Kevin Mills, the deputy executive director of ground vehicle intelligent systems at the Army Ground Vehicle Systems Center, told the National Interest in an interview.

As part of the evaluation, Army weapons developers placed armed robots in the hands of soldiers to assess weapons, refine tactics, and help fast-track a new class of Robotic Combat Vehicles, or RCVs. The service is moving forward with three variants—the RCV-Light, RCV-Medium, and RCV-Heavy—and each robotic vehicle variant is being developed for a complex, interwoven set of unmanned missions. These include manned-unmanned teaming efforts in which forward ground drones or robotic vehicles perform reconnaissance and scout missions, deliver supplies, and even track and destroy targets themselves (when directed by a human).

“The RCV-Light is about a seven-ton vehicle and carries a .50-cal machine gun and a Javelin and several other weapon systems. It is built for modular payloads. The RCV-Medium fires a 30mm cannon from a turret. The lights and mediums were purpose-built prototypes for the soldier operational experiment,” Mills said.

The RCV-Heavy is earlier on in the developmental program but was used in the experiment with an M113 personnel carrier as a surrogate for a future heavy robot armed with a 120mm cannon. Mills explained that robotic vehicles armed with larger caliber systems will emerge more fully in coming years.

“One of the unique features of robotic platforms is that, once you take the human out, they're purposely built to be robotic platforms, so they can be much smaller and still carry significant payloads and have significant middle mobility characteristics. So, the RCV-Lights, for example, are very hard to detect, so that right there gives you the operational advantage of being able to push them forward,” Mills noted.